Rizna Lanfbitt is a magician residing in Zeth, under the personal care of King Gandhi. She is a childhood friend of him and the two were pretty closed when they were in the Magic Academy, but their relationship was cut off when she was kidnapped and trapped in the Genbu Castle, losing contact with each other for over 32 years. By LP0008 she's exactly 52 years old but she still looks 18 because Genbu Castle exists in an alternate dimension where time stops.

Despite her seemingly happy and easeful appearance, Rizna hides a troubled and tragic past from the time she spent in the Genbu Castle. Trapped with no escape along with many others unlucky enough to share her misfortune, her naive demeanor led her to be used by many men for her body several times, and over time, she was almost lost to insanity before meeting the Puchi Hanny Kagekatsu. Feeling sorry for her, he stayed and helped her, healing Rizna's heart over a period of many years. He also taught her how to fight and use the naginata.

Despite being around 50 years old, Rizna conserves a very young body due to the fact that time stopped for her during the over 30 years she spent trapped in the Genbu Castle. She's a very mature and beautiful woman with a long blonde hair, usually combined with a gentle and pure expression. She has a pretty huge bust, claimed to be D cup, and almost always wears a beautiful brown red Kimono with white marks printed over it. She's a very attractive woman, with a perfect figure that attracts males with ease, much to her misfortune.

Often over-trustful and naive, Rizna is well-known for being easily deceived. She is very naive and innocent, and easily believes whatever people tell her, no matter how absurd, always believing in the good intentions of others. She is fundamentally a gentle soul, and is kind to all around her unless she has a reason not to be. Despite her pure soul, she's not above fighting and is willing to go to battle when needed, although she mostly does so when aiding someone valuable to her or simply for self-defense.

Another well-known trait of her is her abnormal arousal. Due to the years she spent when reduced to a sex slave in the Genbu Castle, she has an uncontrollable lust that easily burns her body with the slightest contact. She despises herself for it, and has been searching for many ways to supress it or be cured from it. After the events of Rance VI, Papaya designed a medication capable of reducing the now inherent sexual longing that was unwillingly forced onto her body, but she has to consume it on a daily basis and, by the events of Rance Quest, the drug has proved to have lost much of its effectiveness over time.

Another notorious trait of her personality is her natural, almost instinctive ability to get along really well with Hannies, who she usually befriends and chats with. Hannies like her and she likes them back, regularly spending time with common hannies she meets. In fact, Kagekatsu, the one that helped her when she reached her lowest point while trapped in Genbu Castle, is a Puchi Hanny, who she sees as an irreplaceable friend and benefactor. They both share a very special relationship and are very close, she usually carries him around since he's very small.

From the days prior to her tragic confinement in the dreaded Castle, she knows the now King of Zeth, Ragnarokarc Super Gandhi, as they used to be together in the Magic Academy and she usually took care of him, since she was his senior. It is largely hinted that Gandhi had some romantic feelings for her in the past but this wasn't reciprocal, and Rizna mostly saw him as a little brother. Upon their reencounter, the two managed to recover their lost relationship and she's being protected by him in Zeth's capital. Rizna still sometimes call him "Prince Gandhi" as a habit from her old days, and he himself sometimes refers to her as "Riz-nee".

Thanks to the training bestowed upon her by Kagekatsu, she is a proficient user of the Naginata, a traditional JAPANese form of a pole weapon. Originally used by samurais, Naginatas are wooden poles with a curved blade on the end, making it in appearance similar to a spear. Contrary to popular belief, Rizna is primarily a physical warrior that makes use of her Naginata with great expertise, wielding it with great accuracy and speed. She has a Level Cap of 42, with 32 being her current Level, and makes use of a Self-Defence Lv1 skill, capable of protecting herself from harm on the battlefield with great efficiency.

She also has a Magic Lv1 skill and has some knowledge over magic, but doesn't make use of it all that much in the battlefield due to her lack of expertise in offensive spells, only relying on them when she needs to make use of ranged attacks.

Rizna's greatest ability is her immunity towards magical damage. She always had a very high magic resistance, but this was taken to the extreme upon meeting the Hanny King. Due to her experiences in the Genbu Castle, her body ended up being lustful and easily aroused. She had always wanted to cure herself of this.

The Hanny King heard her wishes, and came to Rizna with three choices.

Rizna immediately answered with number 3, much to the Hanny King's surprise, as he expected her to choose number 1. However, he acknowledged her wish and gave her the absolute magic resistance. This protection makes completely immune to all magic damage, regardless how powerful, which makes an outstanding anti-mages fighter. She's the only human known to ever possess this ability.

Rizna was born in a high-class family in the Magic Kingdom of Zeth in the year GI0971, where she lived a sheltered childhood. When she was 13 years old, she entered the Royal Magical School of Zeth, where she became the student council president due to her excellent grades.

It was around this time that she met Gandhi, who at the time was a roudy young boy in a grade below her, and she took care of him frequently. Ghandi looked up to her as an elder sister, and eventually she even became his first love. She was often attacked by Gandhi with magic when she scolded him, and by being exposed to it, her magic resistance grew higher.

When Rizna was 15 years old, she was noticed by Abert Safety, who was serving as a teacher at the school. Having caught his interest, he decided to send her to the Genbu Castle as a form of his twisted "trial" by presenting it as a graduation test, where she would remain trapped most of the years of her life. Due to her gullible nature to believe in everyone, she was tricked and betrayed over and over in the castle and was trapped there unable to escape.

Five years later in the year GI0991(twenty years old) a pair called the shepherd brothers wanders into the castle and are trapped as well. She cooperated with the shepherd brothers to find a way out, but was raped by them and lost her virginity. They managed to escape from the Castle, leaving Rizna behind.

Two more groups came and left over the course of 20 years, both deceiving and betraying Rizna's trust.

In GI1011, the fourth man to come to the castle was a man named Chidocesei (or "Chidoses"), who also got lost in the Castle. Unable to escape, he spent the next three years with Rizna and he trained her to become his sex slave. At one point near the end of GI1013, she got pregnant with his child, but he was annoyed by this and he continuously beat her up so hard that she had a miscarriage. She began to go mad after losing her child.

Chidocesei finds an opportunity to escape the castle short after and, since he grew bored of Rizna, he leaves her behind and departs the Castle alone. As Rizna was left behind alone in the castle upon losing her mind, a samurai Puchi Hanny named Kagekatsu arrived at the castle. Kagekatsu was heart broken seeing Rizna in her state, and spent the next few years at her side easing her pain and curing her heart. He taught Rizna how to defend herself with a naginata, and waited for the arrival of the next group. At some point, Rance found the dead body of Chidocesei near the Genbu Castle. It's presumed that he got lost and died after getting out of the castle.

In the year LP0002, Rance and Sill arrived at the Genbu Castle. They eventually found their way out of the strange dimension along with Rizna. She was finally free after 32 years. She also developed feelings for him and told him about her past. However, she was rejected by Rance and went back to her former home in Zeth.

Upon returning, her parents were nowhere to be found and she wandered the streets, without a clue of what to do before meeting again with Rance and joining Ice Flame in the revolution. During the events of Rance VI, she eventually re-encounters with King Gandhi, with whom she currently lives with in the Zeth Palace under his protection.

During Rance X, she is kidnapped by Medusa and is horribly traumatized as a result. She is later transformed into a dark lord by Rance after he became the demon king. 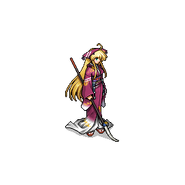 Rizna's appearance in the Harem Master Trading Card Game, alongside Kagekatsu.
Add a photo to this gallery

Retrieved from "https://alicesoft.fandom.com/wiki/Rizna_Lanfbitt?oldid=118772"
Community content is available under CC-BY-SA unless otherwise noted.