Rick Addison was the commander of the Leazas Red Corps.

He is the strongest Swordsman in Leazas, and, since the death of Thoma Lipton, recognized as the strongest man on the continent. He is known across the land for his fearful strength, he has been nicknamed the "Red Reaper of Leazas" by his enemies.

The kanji 忠 written on his helmet means "loyalty". Underneath that helmet is a surprisingly boyish and shy face.

Rick is generally a very polite and kind young man, but when he enters the battlefield he becomes a cold and merciless warrior, to the point of being compared to death itself by his enemies. According to Rance, when fighting, Rick always has a smile on his face.

Despite his immense talent, Rick has a very low opinion of himself and believes that he was appointed General of the Red Corps only because of the untimely death of the previous General and it certainly doesn't help that other people think the same thing.

He has great love for the sword, and admires anyone that can proficiently wield a blade. He has a very profound respect for Rance and his ability to use a sword.

Despite the fact that Rance doesn't like many men, he and Rick are very good friends. When referring to Rick, Rance has said "He's no trouble, he doesn't try to seduce my girls and he doesn't object to my choices." Likewise, Rick holds Rance in a very high regard due to his exceptional swordsmanship and skill at making decisions in the heat of the moment. During the events of Kichikuou Rance, he is one of the only people in attendance of Rance and Lia's wedding who expresses complete approval of Rance becoming King of Leazas, later stating that he believes Rance "was always meant to be a king."

Rick does have a great weakness: underneath his helmet, he has a very young and feminine face. Without his helmet he has no confidence, and gets scared of monsters and ghosts. When wearing his helmet, Rick throws away all insecurity and fear. Luckily for him, this secret is only shared by few, and it is not known outside of Leazas.

Rick has a level cap of 70 and a current level of 55, making him one of the strongest humans on the continent. He's widely known as the "Red Reaper of Leazas" and is currently considered a strong candidate to the world's strongest man.

On the battlefield, Rick delivers incredibly fast attacks, even astounding Rance with the sheer speed of his strikes. Rick wields an enchanted blade named Byroad, passed down through the generations of Red Corps commanders. Because Rick is a level 2 swordsman, he can use a unique special attack. Rick's special move is called "By La Way", an attack that consists of three lightning-fast swings in a triangular shape. Rick is capable of destroying entire armies with this attack alone and it's what gave him his fame and title. Rance has stated that he doesn't like fighting with Rick because to be able to stand his ground against him requires "too much effort", but their strength is more or less equal at present.

As of Rance IX, Rick is capable of using the attack without the Byroad, albeit with much less power.

Despite not possessing a leadership skill Rick is a competent leader capable of inspiring great hope his subordinates, though his leading skills are unimpressive when compared to someone like Barres Province, who would be perfectly capable of defeating Rick if it came down to a battle of armies.

The only opponents that have been seen defeating Rick since he became the General of the Red Corps are the former General of the Helman 3rd Army, Minerva Margaret, the golem apostle of Dark Lord Satella, Isis and the villainous Tousho Dio Calmis. In Minerva's case, however, she was specifically shown to have cheated in order to win, though she is also shown to have gotten the upper hand on him several times while conventionally fighting him.

The only swordsman in Leazas who can surpass him is Zance Leazas, due to his infinite level cap.

GI0990 - Rick is born to a small farming community in Leazas.

GI1006 - Rick, yearning for knighthood, enters the 32nd Leazas Parapara Tournament at the age of 16. He's eliminated in the first round by future Blue Corps second in command Kinkaid Brambla, but his potential is noticed by the commander of the Red Corps, Alto Hanbra. Hanbra takes Rick in as his son and begins training him.

GI1015 - At 25 years old, Rick becomes the 13th commander of the Leazas Red Corps, the youngest commander in history. In this year he repels an advanced Helman force by himself. The battle is known as the Conflict at the Parapara Fort and earns him the nickname of the "Red Reaper".

LP0002 - Rick fights against Helman in the invasion against Leazas, but he is defeated and hypnotized by Dark Lord Ithere. He is later released by Rance and joins the Leazas Liberation Army, where he largely contributes in the war to free Leazas and, at the end of the conflict, in the battle against the Dark Lords. Months later, he joins the Rance Rescue Team in the expedition to Ylapu, where he aids him in his problematic situation to get out of the floating island.

LP0003 Kichikuou Rance (WHAT IF) - Rick is one of the few close friends who attends Rance and Lia's wedding. He expresses absolute approval of Rance becoming King due to his skills as a swordsman and as a leader. He is later used as a mediator to establish an alliance between Leazas and the Patton Faction due to his past with Patton, Hubert and Freak. Leila Grecni may also admit her feelings for Rick, causing them to begin dating.

LP0005 - Rick is considered as a candidate to be sent to aid Rance in JAPAN, however he is rejected due to Rance specifying that he wanted a female commander. He seems to have become closer to Leila around this time as Maria notes that she sees the two of them "spending a lot of time together".

LP0006 - Rick is sent as a reinforcement of Leazas to assist the Patton Faction with their revolution effort in Helman along with Tillday Sharp. Due to his infamy within the country, he momentarily gives both his armor and sword to Leila while traveling in disguise.

RA0015 - Rick aids in training the El Party to fight their father.

Rick without his armor. 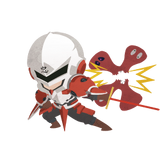