Reichardt was the leader of the Endless Tomorrow Gang, a prominent bandit group that operated along the outskirts of Leazas Castle Town, and a secondary antagonist in Rance 01.

A cold-hearted and cunning individual, Reichardt was able to amass a large number of followers under himself through a combination of talent and charisma. As the leader of the Endless Tomorrow Gang, Reichardt made a hobby out of capturing beautiful women that attracted his attention and relentlessly pleasuring them with various sex toys until their bodies became completely dependent on them. Over time, Reichardt developed an infamous reputation as a dangerous sexual deviant, causing him to be widely feared by the local populace.

During the events of Rance 01, the Endless Tomorrow Gang kidnapped Pulptenks Flanders, the young daughter of Bobza Flanders, the owner of a popular tavern in Leazas Castle Town. Upon being taken to the group's hideout, Pulptenks was immediately given to Reichardt, who brought her to his private quarters, blindfolded her, and restrained her against his bed. With Pulptenks completely defenseless, Reichardt began teasing her crotch with various vibrators, reveling in the reluctant girl's gradual descent into uncontrollable ecstasy.

Reichardt's private time with Pulptenks was eventually interrupted by the adventurer Rance, who had been hired by Pulptenks' father to find her. Angered at the other man for touching Pulptenks before he could, Rance hypocritically declared Reichardt to be a pervert before challenging him to a battle to the death. While Reichardt provided Rance with a difficult fight, he was ultimately killed by the brutal warrior, freeing Pulptenks and causing his bandit group to collapse.

Reichardt was a middle-aged man with a lean, muscular build, short-trimmed hair and a well-maintained goatee. Somewhat strangely, Reichardt possessed multicolored hair that was perfectly divided between each side of his face, with his left side being a bright pink and his right side being a more ordinary black. Along with his strange hair, Reichardt's left eye lacked any kind of visible pupil or iris and was instead a pure white while his right eye was a blood red color. Finally, Reichardt bore a complicated-looking tattoo on the upper-right side of his forehead, further contributing to his exotic and intimidating appearance. Reichardt's clothing consisted of light black gold-lined leather armor that exposed large portions of his abdomen, a pair of iron grieves and a large circular neck guard.

Reichardt's appearance was significantly different in the original version of Rance I, where he was instead a much more plain-looking man with black hair, a small beard and a simple black shirt.

A sadistic and sinister man, Reichardt took careful effort to cultivate a very intimidating aura around himself. He always spoke in a calm, composed and cultured voice atypical of a bandit leader, creating the impression that he was in absolute control of every situation he found himself in, regardless of the circumstances. Reichardt was also very confident in both his own individual strength and the strength of his organization, to the point of scoffing when Rance declared that he would destroy it. This confidence proved to be Reichardt's downfall, as it caused him to attack Rance immediately without any hesitation, beginning the fight that ultimately led to his death. During his final moments, Reichardt expressed shock and disbelief at his defeat, marveling at Rance's unbelievable strength.

Along with his intimidating demeanor, Reichardt was also a noted pervert who derived great pleasure from molesting beautiful women. As a bandit leader, Reichardt made a hobby out of abducting any females that caught his eye to have his way with them. Of the women he captured, Reichardt particularly favored ones with minimal sexual experience, as he enjoyed pushing their bodies to experience pleasure that they were unaccustomed to, seemingly for the feeling of power that doing so gave him. Reichardt had a personal preference for using sex toys to stimulate women, as he claimed that they were capable of producing responses that the human body otherwise couldn't.

Reichardt appeared to generally be well-regarded by his subordinates, with the otherwise unmotivated and unreliable Necai Sys praising his strength and the brutish and slovenly Murala taking pride in being chosen as his bodyguard. This loyalty was also proven to be somewhat limited, however, as Necai made no effort to impede Rance's infiltration of the group's headquarters and Murala quickly abandoned his duties as guard when offered dessert. Reichardt's leadership appeared to be the only thing keeping the Endless Tomorrow Gang together, as it fell apart almost immediately following his death.

As the leader of the Endless Tomorrow Gang, Reichardt was recognized as the strongest fighter in the organization. He possessed a solid Level Cap of 20, which he was close to reaching, granting him a respectable amount of potential as an individual. While not especially high, Reichardt's level cap allowed him to fight formidably against both adventurers and soldiers of the Leazas City Garrison, the two groups that he clashed with most frequently. This strength was responsible for a significant portion of Reichardt's underlings choosing to follow him, making it the cornerstone of his entire organization.

In combat, Reichardt skillfully wielded a pair of large curved swords. He possessed the Sword Combat Lv1 Skill Level, which allowed him a high aptitude for his weapons, as well as the Thief Lv1 skill level, which granted him the ability to move quickly and swiftly to strike before his enemies were able to. Reichardt's great speed and skill were both noted by Rance, who admitted that he was a tough opponent before quickly adding that he was still no match for him. 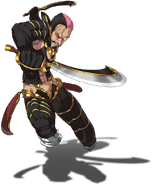 Concept artwork of Reichardt from the Rance 01 manual.

Reichardt's appearance in the Rance 01 OVA.
Add a photo to this gallery