Ranceko is the unofficial name given to the female version of Rance. During the events of Sengoku Rance, there's a hidden event in the Sex Change Temple that allows the player to use the Mysterious Magic of the Temple in order change Rance's sex, turning him into a female as a result.

Upon becoming a woman, Ranceko is overcome with an incomparable confusion and panic, as she quickly realizes the irreparable mistake she just committed and notes that she won't be able to have sex again due to the loss of her Hyper Weapon. Shocked and regretful, she starts crying and immediately runs away aimlessly to the forest, where she's followed by many others like Sill and Kou. This ends with a Game Over for the player.

She makes an actual canonical appearance during a dream Rance has where he turned into Ranceko and many men try to convince her for H, and Rance wakes up in horror after almost accepting Nobunaga, rapidly checking his crotch to make sure his penis is still there.

An incredibly alluring and attractive young girl, Ranceko is noted for being exceedingly popular with the opposing gender. She carries some physical traits from prior to her transformation, like her short brown hair and eyes. She's gifted with a voluptuous hourglass figure, with big breasts and prominently large hips. Her armor also went through a transformation, changing into a far more revealing outfit that exposes most of her skin and gaining two long green gloves, though the distinctive green theme within them still remain.

Her personality however is nothing like that of her previous self. Once brutish, perverted and cruel, Ranceko is an extremely bashful and timid person with little courage and assertiveness. She has a weak will, is quickly driven to tears and loses all and any personality traits she carried in the past. Unfortunately for her, she's extremely beloved by males, who regularly try to convince her to sleep with them as they find themselves very attracted to her. She's, however, largely incapable of establishing solid conversations with such people and finds herself escaping from such scenarios with frequency. She's completely uninterested and frightened by the idea of having sex as a female, and does everything in her power to avoid people that attempt to sleep with her. She does however show great signs of affection towards men that don't, like Ashikaga Choushin, who found her ugly and, thus, was uninterested in her. The only person with who she lowered her guard was against Oda Nobunaga, who managed to use his charm to seduce her and almost managed to have sex with her.

Overall, Ranceko is like a complete opposite of the original Rance, and has remained a virgin for the short periods of time that she made appearance in the series.

Due to the fact that prior to her transformation into a female she was a highly talented and powerful adventurer capable of outstanding feats throughout the land, Ranceko is presumed to retain her absurd potential, including her incredible swordplay. She most likely lacks a Level Cap as well, granting her an unlimited potential that allows her to become infinitely stronger the more she fights. Additionally, she's presumed to be able to raise the Level Caps of those she has sex with, becoming an invaluable ally as a result.

All these traits, however, are largely irrelevant due to the personality changes she went through along with the transformation, and she most likely lost the courage or self-confidence to ever wield a sword again, rendering all her natural skills worthless. 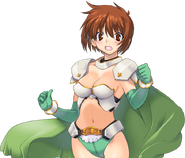 Full body artwork of Ranceko from the Sengoku Rance manual. 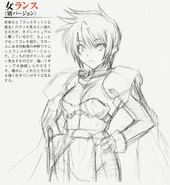 Concept artwork of Ranceko from the Sengoku Rance guide book.
Add a photo to this gallery
Retrieved from "https://alicesoft.fandom.com/wiki/Ranceko?oldid=110459"
Community content is available under CC-BY-SA unless otherwise noted.