There are 4 buttons on the screen.

The Adventure Screen is the screen where you will see whenever you start a new game or start from a different chapter where you have stopped.

2. Timer Time ticks by on this icon with each action on the adventure screen. After five actions, one of the units in the time bar will be used up.

3. Items on the Ground Click to pick them up. Some items are sold at shops, too.

4. Character Cards Rance and his party members are displayed here. The frontmost character will be used when taking actions. In this example, it’s Rance, but you could make Sill the acting character by clicking her face CG.

5. Important Things This card represents the important thing in the scene. Acting on these items (opening treasure chests, searching something) may require a success check.

6. Item Cards These are Rance’s party’s items. Not every item is displayed, just ones that may be useful in each scene. Use them by dragging and dropping them on your target. The first entry isn’t an item, but a special action the acting character can use.

NOTE! When there are characters which are not in your party, their character card will be presented on the lower right. Clicking on those cards will make your active character talk to that character.

NOTE! If there are any items lying around after investigation of background or after opening the treasure chest, they are displayed as square icons to the right of the background. You can click on those items to get them.

Often, when performing actions (searching background, opening treasure, convince people, disarming traps, etc), there's a "chance to succeed". Some actions will have a higher success chance and some characters performing the action may have a higher chance to succeed than others. The diffculty will be displayed in the first row of a 10-column chart. The number of red bars in the first row in the beginning indicates the hardness of current action. It can be lowered by using different character, or by trying this action several times, lowered hardness shown with green bars. Orange bars in the second row count the number of hits you have, which needs to exceed the red. The third row, consisting a bunch of O's and X's, are your attemps of hit/miss. One example is shown below (on the upper row there are 3 red, 1 green and 6 blue bars, so that means that you need to get 4 hits to be successful): 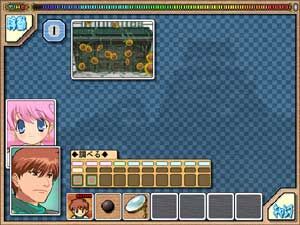 The button at the bottom right corner is the Camp Screen.

Movement in dungeon is done by the roulette. There are three types of movements you can choose from in the middle lower part of the roulette:

This is what happen when you start a battle.

In this game, there’s nothing the player can do in battle. You just watch. When the battle starts, a die is automatically rolled to decide which battle actions are taken. For instance, if the die rolls 4, both your enemies and allies will take the battle action in slot 4.

The symbol to the left of the battle actions is their range.

Once a battle starts, cheer on your party. However, it’s not as if there’s nothing you can do about battles. Before battles, you can change the arrangement of characters’ skills and their places in your battle party to prepare for battle and raise your chances of winning. After a battle, every member of your party (even those who didn’t battle) receive experience. Battles also take up time. In between the enemy and ally face CGs is a mini timer. If it all runs out, you’ll lose one unit of time (though it’s normal to lose a unit of time in battle).

The Camp Screen has buttons that allows your characters to rest, re-group, reorganize, and level up. Entering camp mode takes up one unit of sub-time. (1/5 of a unit of time)

From left to right: 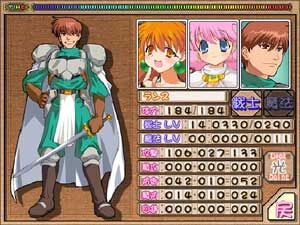 For each character with different classes at certain fixed levels, he/she will pick up new skills.

You can see the target range by seeing the shapes at the left side of the skill name:

The skill alignments are shown in the box on the right side of the skill name. *Red = Fire