This is a rough walkthrough of the remake of Rance III - Fall of Leazas, Rance 03. 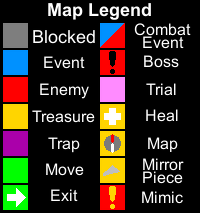 is made so anyone wanting a somewhat spoiler-free way of getting everything in the game can do it. It may require some rechecks in the wording of some things, so keep in mind that it is not perfect.

Also, it is here in order to help with the mechanics of the game in some parts, so people that don't understand Japanese at all and are using an auto translator, or that don't know much about Japanese, don't get stuck.

Forest of the Lost (迷子の森)[]

*notice that the some of the enemies here are parody of Zaku (Gundam) and Kamen 'Bug' Rider?

POINT OF NO RETURN AHEAD

Using too much heal and protection Skills a.k.a being too defensive is not really effective here since you are just going to needlessly prolonging the fight against 3 phased boss, so I'm prioritizing quantity of attack right instead (6 offensive and 2 defensive). I don't know how effective it would be if you replace some of the weaker offensive skills or simply big cooldown like Aten and Shizuka with Rance's 4th Skill (strong self buff) and Milli/Barres 2nd Skill (strong ATK+ buff for everyone). Maybe you can try it!

This setup focuses more on Rance damage and can kill the boss extremely quickly as Rance will be doing 10k per hit when double buffed. Barres and Maria mitigation helps you last longer on 3rd phase with less levels while Rick and Menad do very strong AoE to wipe out the secondary parts quickly. If you haven't invested in them, or don't have their powerful 6* skills, you can instead use other units like Shizuka or Aten. Similar to the above strategy, don't go too much into defense.

Note that the character must be in the active party for the effect. Also, many 03 skills improve with consecutive battles (maximum effect at 10 times).

For tough battles in general, party defense buffs are amazing because you will always know the type of incoming attacks. If you are having trouble surviving, use more defense buffs.

Also, consider including Menad and Maris for their extremely clutch 03 skills.

Party: For defense/heal, same as set up for Hanny King (#1~3). For offense, the order of preference changes: