Radon Alphorne is the former Secretary of Education of the magic kingdom of Zeth, as well as the former leader of the mage supremacist party.

Born into the Alphorne family, one of the oldest and most prestigious noble families in all of Zeth, Radon enjoyed a life of pleasure and privilege from birth. His family's enormous influence allowed for him to attain an estate known as the Amber Castle that was even larger and more decadent than the royal palace of Zeth, as well as the title of secretary of education, one of the most important positions in the entire nation. As the secretary of education, Radon continued to support the "Pressure Free Education" acts passed generations before, which made educational opportunities within Zeth only open to those who could afford them, further widening the power gap between the wealthy first class and the struggling second class. During his free time, Radon organized a slave fighting arena, where he pitted groups of non-magic using slaves against various monsters to see who could survive the longest for the entertainment of the other nobles. He also organized the mage supremacist party amongst his fellow nobles, which stood in opposition to the progressive reformative ambitions of King Ragnarokarc Super Gandhi.

During the events of Rance VI, Radon sent out a job request to the Keith Guild to find and capture a servant of his named Lulu, who had stolen a golden candlestick from his estate. Incorrectly believing Lulu to be a woman, the warrior Rance took on the job alongside his faithful slave Sill Plain. The two eventually found the golden candlestick, along with Lulu's corpse, and returned it to Radon's estate. Disgusted at having it tainted by the hands of a servant, Radon carelessly threw it away, causing an enraged Rance to attempt to attack him. Believing Rance to be the unruly slave of Sill, Radon cast a sleep spell on him and had him placed into his slave arena. Outraged at having to fight in the all-male slave arena and being separated from Sill, Rance vowed to brutally murder Radon at the first opportunity he had.

Radon later encountered Rance again after the latter had become the captain of the non-magic user rights group Ice Flame's Green Corps, who were working in tandem with the anti-mage extremist group Pentagon to complete the operation "Libertate the Motherland" to deactivate the Maginot Line, Zeth's primary defensive wall, to weaken the power of the nobility. In order to learn the locations of the mana batteries that powered the Maginot Line, the Green Corps kidnapped Radon's daughter Emi Alphorne, forcing him to disclose the mana batteries' locations in exchange for her safety. His love for his daughter overpowering his reason, Radon revealed that one mana battery was located in each of the towers of the Four Lords of Zeth.

Following the deactivation of the Maginot line resulting in the monster army that had been surrounding Zeth's border entering and destroying the country, Radon and Emi successfully joined the evacuation program and escaped the destruction of Zeth with their lives. After the monster army had been completely eradicated, Radon, his fortune lost and his estate in disrepair, was forced into the care of Ice Flame. Radon was moved by the hospitality the second class citizens who he had spent his lifetime treating as subhumans had showed him, and vowed to change his ways as a result, remodeling the remains of his estate and slave arena with the last of his fortune into an amusement park that admitted people free of charge.

Radon is an overweight and middle-aged man with shoulder length blonde hair divided into two intricate curls parted onto each side of his forehead, a small mustache and a bloated face. He is often compared to a pug in appearance due to his wrinkled and sagging flesh. He notably peppers his sentences with the strange sound "Pururu", furthering his similarities to an animal. Before the collapse of Zeth, he wore gold-colored robes with a purple cape and a brown academic cap. After the collapse of Zeth, Radon lost his academic cap and began wearing a simpler tattered suit.

A man who knew only privilege throughout his life, Radon enjoyed loudly displaying his wealth at all times, organizing elaborate parties amongst the nobility on a very regular basis. Having been raised from birth to see non-magic users as inferior beings who existed solely for his entertainment, he treated all second class citizens as little more than tools, having an arena built specifically to torture them for his and his peers' amusement with no concern for their lives. Despite being the secretary of education, he had no interest in actually improving the at the time highly skewed educational system of Zeth, to the point of expressing annoyance and outrage at the suggestion that it required reformation. Radon's personality changed drastically after the collapse of Zeth, where he lost the majority of his money and power and was put under the care of non-magic users. As he was moved by the kindness of the former second class citizens, Radon became more tolerant of others and chose to devote the remainder of his life to providing happiness to all people regardless of their magical ability.

Radon carried a grudge against the King of Zeth Ragnarokarc Super Gandhi due to his desire to achieve equality between first and second class citizens conflicting with his own desire to maintain the status quo within Zeth. Radon disliked his king so heavily that he organized an anti-Gandhi conservative party with his fellow nobles. Due to the combined power and influence of the nobility surpassing even the power of the king, Gandhi was unable to have any of his reformative bills successfully passed and was forced to take more hands on action to improve the country.

Radon was very good friends with Zeth's secretary of finance Zulki Crown, who came from a similar highly prestigious noble background. Their bond was close enough that they agreed to having their respective children arranged to marry each other, showing that they were willing to unite their families.

Despite his several very negative qualities, Radon deeply loves his daughter Emi to a point where his desire for her safety and happiness surpasses his own greed. After Emi had been kidnapped and held for ransom by Ice Flame, Radon immediately broke down and begged the group to return her to him no matter the cost, revealing the locations of the power sources of the nation's most vital defense system to them in the process. After losing most of his wealth and power following the fall of Zeth, Radon remained happy that his daughter was safe, further showing that he valued her more than any of his other possessions.

An old and out of shape man with very low capabilities, Radon is indicative of the idleness and decay of Zeth's nobility over time. He possesses a Level Cap of only 2, giving him next to no potential as an individual. Radon himself is aware of his weakness, and admits when under pressure that, though he is a mage, he is not a very good one. This incompetence was clearly shown when Radon attempted to defend his estate from rioters during operation "Liberate the Motherland", where he was unable to cast a single spell before being beaten into submission.

Despite his general unimpressiveness, as Radon was capable of passing his nation's magic exam in his youth, he is likely proficient in the Magic Arts, though not to a very remarkable degree. He seems to be particularly skilled in sleep magic, which is noted to be difficult to perform, as he was able to instantly knock Rance unconscious after using a sleep spell on him. 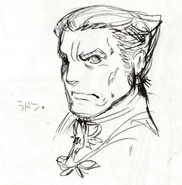 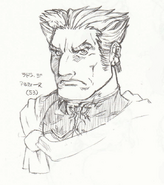