Rachett Luncheon was a shopkeeper working in a Weapon Shop in the town of Ice from the Free Cities Alliance. He was a muscular and tall man with a bald and a pigtail. He also had a huge scar in his face.

He was the father of Wrench Luncheon, who inherited his shop upon his decease. Rance had sold him the Holy Items to him, but when Rance need them back he told him he would be willing to sell them back to Rance for 2000G. However, after he got the money, Rachett had already given the holy items to Rola Indus, much to Rance's anger. He claimed that he wasn't planning to give him the holy items back anyway because he hated Rance for molesting his daughter, which got Rance and Kanami mad and ended up killing him.

Before dying he whispered his daughter's name, claiming that she shouldn't find a man and that she belongs to him. Given the later implications that she was victim of sexual harassment from Rachett's part, this leads to believe that Rachett was madly obssesed with his daughter. 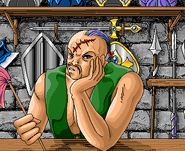