QD is one of the oldest living entities in the World of Eve. "QD" stands for her personal name, Qu Dragon, though most residents of the world mistakenly believe it stands for "Queen Dragon." She serves as leader of the dragons, of the Witches of the Round Table, and as custodian of Camelot, where she monitors the progress of souls through the process of reincarnation. She arguably served as first queen of the Kingdom of Arthur, through her marriage to its founder, King Arthur, though her level of personal involvement is unknown. She and Arthur are the great ancestors of Aster.

In the deep past, QD was a close friend to Mother Eve. She wrote Eve's history in the book known as the Evenicle, and was present when the Archfiend Adan exploded, causing both the World of Eve and QD herself to split into pieces. The QD who remained in the same world as the Archfiend's Right Arm served as leader of the dragons for many years. One day, she was confronted by King Arthur and the exodus of humans coming from the north. They met and negotiated (an event that historians mischaracterized as a great battle), and agreed that humanity should inherit the planet from the dragons. The two were eventually married, and QD formed the Witches of the Round Table.

Some centuries later, QD has retreated from the material world, and now holds stewardship over the castle of Camelot. There, she secretly continues a grand plot against the Creator God, believing him responsible for the suffering of her late friend, Eve.

QD is a slovenly, frivolous, easy distracted and selfish person, not at all becoming of a mythic figure. This may be disguise against her true, deicidal purposes, but the layers are so thick that it becomes impossible to separate her true personality from any fake, and it may be that both are true. QD likes to sleep in, play video games, and to collect mountains of cruft entirely unrelated to her actual responsibilities. She has all the time in the world, and seems to be on a one-woman mission to fill every second of it with garbage.

One of QD's most recent hobbies is the collection of "emptistories," or "empty stories." These are essentially stock plots, removed from their characters and particulars. She secretly believes these emptistories will somehow give her an edge over the Creator God, though even she isn't sure of how exactly that might play out. This hobby is, in part, the primary reason that so many places and people have names from real-world fiction and myth, as she suggested them from material acquired from other dimensions.

Despite her generally aloof personality, QD takes her pact with humanity very seriously, and expects the same seriousness from her subordinate dragons, like Aster. When Millet broke both her orders to guard the Mirror Labyrinth and the pact with humanity, QD took the offense personally, and took Millet's punishment into her own hands.

QD holds the appearance of an incredibly small woman while in her humanoid form. She presumably has a dragon form, but this has yet to be seen (Towa illustrated her as a white-scaled dragon). She has the ability to shapeshift her human form at will, so any physical description is temporary at best.

It is currently unknown if the QD from the world of the Archfiend's Right Arm is similar or distinct from the QDs from other fragments of the World of Eve.

QD is supposedly one of the most powerful creatures in the entire World of Eve, but as her pact with humanity prevents her direct interference, and as QD is prone to boasting and lying, it is hard to tell the exact extent of these powers. Like most fullblooded dragons, she is effectively immortal, and can teleport from place to place. She has demonstrated the power to control gravity, to such an extent that she can even move the fragments of the World of Eve at her leisure, allowing travel between them. She can also hear at ridiculous distances, speak telepathically, and reach through her descendants' shadows as though they were a portal. She claims her powers go even further than that, to such a degree that she could wipe out civilization in a single blow.

QD is the creator of a small handful of landmarks in the Kingdom of Humpty, and also created most of the monsters classified as "Ancients," with the exceptions of dragons themselves. This includes the Circle and Sphere line of monsters, which seem to imply a lack of imagination in this particular field. 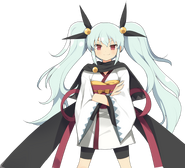