Puryos are very weird and curious creatures, with a very strange biological anatomy. Their body is slimy and soft, having a viscose physical structure. The only solid parts of his body are his two horns under his eyes, which they use to attack their enemies. Their physical strength is higher than one would think, but they are taken down with relative ease. Humans label them as monsters but they are actually Insects, creatures without Souls born from the Holy Beasts.

The most common Puryos are very small, being only a bit bigger than a rat in size. This is because this is not the Puryo's true body. Their real body is a giant mass, taller and a lot wider than a regular human. The Puryo has the unique ability to split itself into many smaller copies of himself. Individually, they are not too strong, but in groups they make fearsome foes. The Puryos all have individual minds and sentience, acting on their own rather than following orders from other, but they all work together and they can merge back into one.

Puryos looks like friendly and adorable creatures and, while they are not brutal like other monsters, they are just as hostile. A very notable trait of the Puryos is their tremendous appetite. They often move around searching for food and if they find some delicious meal they will most likely ignore other individuals unless they are provoked.

They also have a strange ability to take control of the mind of a human if many of them attach to him or her. This person will usually enter in a trance state and will search for food to feed herself in the place of the puryos. The main body of the Puryos can also be used to trap and devour creatures as large as humans.

Pigu Geliciam is a human who's body structure was mixed with that of a Puryo, granting her many of these traits of the race.

In Rance IV, both Leila Grecni and Maria Custard are consumed by the main body of several Puryo (and Kanami Kentou is attacked by smaller Puryo, possibly trying to envelop her in turn). Rance is able to rescue them with the Puryo Sword, but Maria was entranced and wanders off to find food to eat. Rance and his party eventually track her down, and manage to rescue her from her state.

In Evenicle, a giant, One-Fanged Puryo appears as a Megamonster near a landmark called East of Eden. 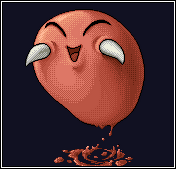 A Puryo attacking in Rance IV.

Maria mind-controlled by a group of Puryo. 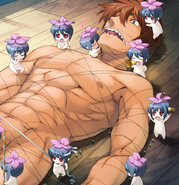