Prima Hononoman is a regular girl born into the Kingdom of Zeth. Unskilled in the Magic Arts she was among the lower class citizens that would receive an extremely poor treatment in the Magic Kingdom, which led her to join the resistance group Ice Flame in an effort to improve the rights of non-mages in the nation. She used to be a member of the Black Corps but at some point her whole platoon was murdered by SaberKnight in the city of Italia, with her being the only survivor of the massacre. Some time after, she was quickly recruited by Rance when he formed his new Green Corps, as Rance wanted to replace the talented but unattractive Natasha with someone more to his liking. Even as part of the Green Corps she was still deep in mourning for her previous squad, placing flowers on their graves and looking for an opportunity to avenge them. As she's a beautiful woman, Rance often tried to convince her to sleep with him but she refused every time.

Following Hassam Crown's capture and imprisonment, she agreed to have sex with him if he somehow managed to take Hassam's life, as she wanted revenge for her fallen teammates. During the Prison Raid operated by Rance as an excuse to get his hands on Emi Alphorne, the group found Hassam and engaged in combat against him, defeating him after a brief battle, who was brutally murdered by the members of the Pentagon. While Rance's group wasn't the one that took Hassam's life, Prima was still satisfied with the result and agreed to sleep with Rance.

Prima is a tall woman with very light brown hair that almost seems silver, and wears a black jacket alongside a brown leotard that emphasizes her figure. She is often carrying a brown mallet containing her medical supplies.

She is a fairly serious and solitary woman, usually displaying a no-nonsense attitude, but she can lose her composure when faced with Megadeth's constant flirting and teasing. She has a hard time dealing with Megadeth and is slightly afraid of her to the point that she prefers to avoid her altogether, but her efforts amount to little due to Megadeth's stubborn nature. Megadeth has a crush on Prima but abstained from getting her hands on her as she dislikes having to deal with virgins, but ever since she slept with Rance she has pushed her for sex despite Prima's protests on the matter. Beyond her cold and serene exterior she proves to be a surprisingly submissive and unassertive person.

Her relationship with other members of Ice Flame is a good one and she seems to have been fairly close to the now deceased members of the Black Corps, as she spent quite a lot of time mourning over their deaths.

Alongside Daniel, Prima is the only known healer to be part of the resistance, but like him since she's not a Mage she does not rely on Divine Magic but on various first aid treatments to keep her allies alive. This method is obviously a lot less effective in the middle of the battlefield but as there are no other methods to provide medical assistance without employing healing magic, it still proves very useful and makes her a decent asset to the fighting squads of the resistance. Despite this, Prima is not particularly skilled as a Medic as she doesn't have a Skill Level on the field, making her only decent. She learned everything she knows of Medical Treatment from Daniel Safety, the expert doctor of Ice Flame.

Beyond her healing prowess, Prima is also a decent combatant that fight primarily by wielding a whip in battle. She's quite weak and physically frail however, and it only serves as a basic defensive tool. While she has a slightly above average Level Cap of 22, as direct battles are not her main talent she doesn't benefit much from it and is only Level 4 at present.

Behind her decent abilities on the battlefield hides Prima's true talent as someone with a considerable amount of talent as a teacher. With a Teaching Lv1 skill, she could potentially achieve a great expertise that would allow her to share knowledge to students in an efficent and qualified way. 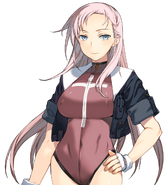