Potauf Tokrev is a member of the Helman Revolutionary Army that rised up in LP0006 to take down Stessel from power and give Prince Patton his legitimate place in the throne.

A member of the army itself commanded byHanty Kalar to serve as a decoy army, Potauf was a key member. He's notorious for his incredible simmilarity to the Prince Patton himself, to the point he could perfectly be mistaken for a lost son of the Emperor. He was originally meant to be a cook, but his outstanding resemblance to Patton made him an ideal Body Double to serve as a decoy, attracting those wishing to take the Head of the Army. He wasn't exactly thrilled to take this role, but still did it due to his will to cooperate with the Revolution.

Wearing the clothes Patton had during his invasion to Leazas, Potauf looked like a clone of the Prince, although his personality is tremendously different, being more coward and weak. He was personally protected by Hanty Kalar herself, who made sure to guarded him as if he was the real Patton. The plan worked perfectly and he managed to confuse the enemy, attracting members of the Dark Wings to attack him. 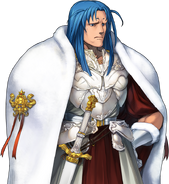