Porewit is one of the three Ancient Elders serving Deirdre. He has a very long chin and a bit of beard, and wields a Khakkhara in his right hand. Much of his body, except his head and arms, are inside a painting. When his mouth is closed, his chin might be mistaken for his chest. He attacks with light bullets from his left hand, as well as vines summoned from his Khakkhara in his right hand. He is capable of gathering energy from the painting he is in to heal himself, making him invulnerable while the painting is intact.

He was assigned by Deirdre to assist Fenrir, and blocked a hole between the First and Second Exhibition Halls of the Art Gallery, where he was slain by Shura. Shura did this by covering the painting in paint thinner and then setting it on fire. After the battle he made sure to douse the flames.

Before his death, he revealed that he had lived a longer life than Shura's, and that he was glad to finally be able to rest, ending his tiresome existence. 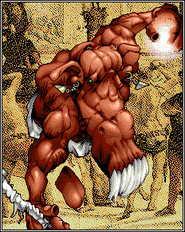