AliceSoftWiki
Register
Don't have an account?
Sign In
Advertisement
in: Articles with No Spoilers, Articles needing a Quote, Characters,
and 3 more

Pluepet is a talented merchant born in the free city of Portugal in GI980. He travels to all sorts of places as a travelling merchant selling rare goods. He appeared in most Rance games after the 4.x games, and also made appearances in Toushin Toshi games.

He's a strange green creature that travels around in something that resembles a spaceship. His race is unknown but he's probably some rare type of monster.

Personality-wise, he's a businessman. He's a very skilled and clever individual that knows how to trade, but he's also very cruel and cold, showing no interest in everything outside of selling his goods and making money. He completely lacks morality and will do whatever he considers will bring the best earning, regardless if it's selling drugs, slaves or innocent girls as prostitutes. He simply sees everything around him as a means to trade and increase profits, and is perfectly fine with helping people as well if he thinks it will be profitable.

He's very good at negotiating and trading, always finding the best way to buy good as cheaply as possible, with a balance of price-quality, and selling in the most proficient way without being a rip-off. He's usually with a friendly smile and very calm most of the time. Despite his nature, he's a pretty honest individual and doesn't lie to his customers, but he does hide information to them, sometimes even admitting openly that he's doing so if he believes it won't bring a negative outcome. He's mostly neutral to most things and isn't one to take sides unless it's for something that would harm him directly. 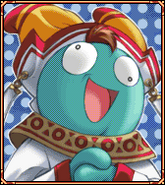 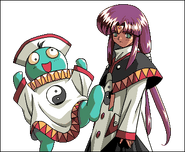 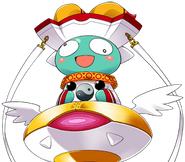 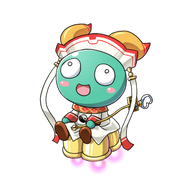 Pluepet's appearance in Three for the Slash! Thrust! Burn!.