AliceSoftWiki
Register
Don't have an account?
Sign In
Advertisement
in: Articles with Major Spoilers, Articles needing a Quote, Characters,
and 5 more

Peruelé Kalette is the personal maid of the empress of the Helman Empire, Sheila Helman. She was born in a poor district of the country and had a tough life. While she struggled to get to the relatively safe position where she is in and had to work hard, she's also the type to cheat and take as many advantages as she can. While she serves Sheila, she holds a bit of a grudge against her, born from the envy of her position due to not having to work hard for anything, although she's still completely servile towards her and acts pleasantly in front of her.

During the events of Rance IX, Sheila wanted to leave the palace because she wanted to help out the citizens due to the terrible state they live in as a result of the dreadful economy in the country. However, being the empress, she was prohibited of doing such a thing, so Peruelé suggested to swap places with her, changing appearances via a magic potion and making her look like a normal girl. Sheila, took her surname Kalette and began using a false identity named Russian. Sheila, was later captured and almost sold in a slave trade before being found by Rance and being forced to work under him as a result and unable to return.

Meanwhile, Peruelé, now dressed and transformed into Sheila, wanted to take advantage of the situation to get a nice and comfortable experience as the empress for a change, even if for a little time. However, this horribly back-fired to her when the Prime Minister of Helman, Stessel Romanov, the man that holds the real power of Helman, started flirting with her. Afraid of being revealed and getting executed, she had no choice but to act submissive while Stessel grew more and more carnal, resulting in her being raped by him.

During the chaos and confusion caused by the Helman Revolutionary Army, she ended up being captured by Rance amidst the turmoil thinking she was Sheila, and proceeded to rape the fake Empress of the country, only to get the effect of the potion running off right after he was done, returning to her original appearance. He then keeps both Sheila(disguised as Russian) and Peruelé as his personal slaves. After the Revolution ended, Sheila became the President of the newly reformedHelman Republic, now holding real political power. Peruelé remained working as her personal secretary and she doesn't really hold any grudge against her anymore, changing her opinion of her and regretting that she deceived her for her own gain.

Peruelé is a petite and pretty average girl in looks, not being particularly attractive, but not ugly either. She has a short purple brown hair and slightly tanned skin, traits that were copied into Sheila when turning into Russian. Her clothing is that of a typical Helman maid. Despite these clear differences, her resemblance to Sheila with the potion was very convincing, growing a longer hair that became blonde and changing her eye color. She was also notoriously skilled at imitating Sheila's voice and was able to fool those around her with her performance.

Despite her small and inoffensive body, Peruelé has a pretty strong personality. While she acts mostly submissive and obedient in order to avoid being arrested, she's pretty clever and tends to come up with underhanded tactics for her benefit, even when it's just for harmless and irrelevant things. Despite this, Peruelé is one to quickly lose her cool, immediately shifting into an extremely pessimistic person that instantly thinks of the worst situation possible. She gets really worried of being executed for her acts when even the slightest sign that she will get caught surfaces, which happens frequently. However, Peruelé's still surprisingly audacious and bold, enough to dare to swap places with the Empress just to enjoy a lavish position, an act that easily could have gotten her executed. 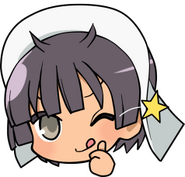 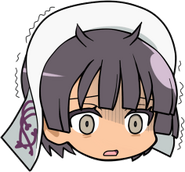