Pegasus Fort is the former general of the Leazas White Corps and the mentor of Ex Banquet.

A long-standing veteran general, Pegasus loyally served his country across several generations of rulers. In his old age, Pegasus came under a large amount of pressure from the nobility to finally retire and pass on the title of general of the White Corps to another. For many years he stubbornly refused to comply, claiming that he would only retire after finding a person who he deemed to be a worthy successor.

Toward the end of the GI Era, Pegasus finally stepped down from his position, leaving the future of both his unit and his country in the hands of his protege Ex Banquet. Despite being no longer officially recognized as a soldier of the Leazas Army, his refusal to leave his country in the hands of others has caused him to remain an active presence in its affairs, regularly overseeing and advising Ex during strategy meetings.

During the events of Rance 01, Rance briefly encountered an open grave marked with Pegasus' name when exploring the Leazas Castle Town cemetery. While the grave's inscription acknowledged Pegasus' contributions to his nation, referring to him as a hero, Rance noted that he considered creating a grave for someone before they had died to be rather macabre. Rance made use of the grave during his competition with Menad Shisei to see who could defeat more Undead by converting it into a makeshift pitfall to temporarily trap Menad and delay her progress.

In the non-canonical Kichikuou Rance, Pegasus aids Ex in forming the Leazas Rebel Army in opposition to the monarchy after Rance is crowned King of Leazas, believing him to be a despot who would inevitably lead the country to total ruin. While Ex is officially recognized as the rebellion's leader, Pegasus is shown to have been a major influence on his decision to have started it in the first place, and consistently reassures his student that his choice to do so was the right one even as Ex becomes more pensive about it.

Pegasus is the only prominent member of the rebellion who is required to be killed in order to successfully destroy it, and will dedicate his dying breaths to cursing Rance and his corruption when defeated. If he is killed before completely conquering the rebellion, his death will weigh heavily on Ex, who will question whether he genuinely wanted to fight against Rance or was simply following his mentor's orders, causing his performance in battle to sharply decline.

In the canonical timeline, Pegasus remains alive, and continues to oversee his student's progress as a general. Despite this, he has made no appearances in any game since Kichikuou Rance, making his current status somewhat unclear.

Having already hit the age of retirement years ago, Pegasus is one of the oldest people currently alive and still active on The Continent, and is 66 years old as of LP0006. While he possesses features typical of a person his age, such as a wrinkled face, white hair and a receding hairline, his firm and fiery personality causes him to appear to be younger than he actually is. He always carries a steady and powerful stance and maintains a healthy body that is still full of energy even after decades of strenuous activity. During his appearance in Kichikuou Rance, Pegasus is depicted wearing a variation of the standard white plate armor of the White Corps that includes a large white cape, grey boots, and a white bandana bearing the Leazas emblem on its forehead, causing it to resemble the flag of the Leazas Rebel Army.

Pegasus is a devoted patriot of Leazas who acts entirely based on what he perceives to be best for the future of his country. An incredibly passionate and strong-willed man who never falters in the face of conflict, he has no problem with going against the wishes of others in order to do what he believes to be the right thing. Unlike his disciple Ex, Pegasus is a very obstinate person who refuses to change his opinions or even attempt to understand points of views different from his own. This stubbornness proved to be his undoing during the events of Kichikuou Rance, where he callously dismissed his former colleagues' attempts at pleading him to surrender, calling them fools for viewing Rance as anything more than a monster and futilely fighting against them until his death.

Over his long career, Pegasus personally trained many soldiers in the ways of strategic warfare. He was noted to have been incredibly strict as a teacher, with nearly impossible expectations for his students to meet, resulting in almost all of them being deemed disappointments by him. Of his countless students, only the prodigiously gifted strategist Ex Banquet was able to successfully live up to his standards, causing Pegasus to recognize him as his protege and successor as general of the White Corps. While Pegasus remains critical of Ex, often disparaging his strategic decisions and very rarely directly praising him, he acknowledges him as a gifted person who he is willing to entrust with the future of Leazas. In turn, Ex highly respects Pegasus as his mentor, and takes every suggestion he makes to heart.

Pegasus is an old acquaintance of Barres Province, the supreme commander of the Leazas Army. Both men have dutifully served their nation across several decades, allowing them to have developed a strong respect in each other's abilities. Despite this, the two often clash over their opposing ideologies, with Pegasus often showing irritation and outright hostility toward Barres' unwavering support of the Leazas royal family above all else. Pegasus considers Barres to be his most preeminent rival, someone who he is destined to come into conflict with regardless of the mutual admiration they have for one another.

As the former general of the White Corps, Pegasus is very skilled in espionage, infiltration, and tactical warfare, and has decades of experience to further temper his ability in each of these area. While he does not possess a Skill Level in any of these fields, he is a smart and prudent man whose dedication allowed him to carry out his duties competently over many years despite lacking natural talent. Additionally, thanks to his fierce personality, Pegasus is a skilled leader and field commander who is able to take control over a large number of soldiers with unshakable resolution. Even after his retirement, Pegasus retains a remarkable amount influence over many of the White Corps' members, as well as several soldiers within the Leazas Army as a whole. This influence has resulted in several people within the army greatly valuing his words and opinions, to the point of joining him in a coup against the monarchy.

In direct combat, Pegasus is a competent fighter who possesses both Sword Combat Lv1 and Spear Combat LV1 skill levels. While the army he led does not specialize in frontline fighting, he is nonetheless a strong combatant with an above-average Level Cap of 30 who has managed to keep his body in good shape even into his old age. Due to inactivity from his retirement, his Level has gone down to 15, though his truly remarkable vigor allows for him to remain an impressive fighter warrior.

Despite his well-rounded and competent abilities as a commander, however, Pegasus' performance as a general is not nearly as impressive as other, more specialized individuals within the Leazas Army such as Rick Addison or Barres Province, causing his military record to pale in comparison to theirs. His skills as a strategist are also vastly inferior to those of his disciple Ex, something which subconsciously irritates him. 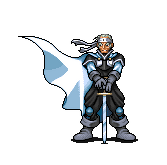