Patty is a shopkeeper working in the capital of Leazas in an Item Shop called Baltic. It is designed as a beachside clubhouse, and as such she both sells general items and shaved ice. She can't make up her mind as to what to focus on. She's great at cooking Yakisoba, a JAPANese dish that originated as a variant of fried noodles.

She's a cheerful and optimistic girl, opposite to her best friend, Millie Lincle, who's much more quiet and reserved. She thinks of Rance as an interesting person. She loves water and hot environments, and dreams with going to a beach sometime and see a real sea. After she became the owner of her store, she decorated it with shells and spread sand on the floor to simulate a small beach in it. She also dresses accordingly.

She's childish and has a pretty underdeveloped body as well, which makes her look younger than she really is. It is later revealed that her real name is Patricia Friday (パトリシャ・フライディ, Patorisha Fraidi) and she's from a noble family in Leazas, despite the fact that she doesn't look or act like a noble at all.

In Rance 03, she and Millie are saved from the invading army of Helman that occupied the Leazas capital, since they coincidentally traveled to South just before the invasion. Her sister, Saya Friday, is among the group of nobles that are attempting overthrow the Kings, although Patty remains completely unrelated to the group. She still seems to hold concern over her family since it's heavily implied that she's been giving gifts to her imprisoned sister in the epilogue. 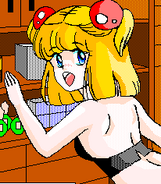 Patty's portrait in Rance I.