Ozou is one of the three optional mercenaries that can be recruited in the Sengoku Rance spin-off game Three for the Slash! Thrust! Burn!. She is a bumbling Miko who costs 600 GOLD to hire, making her the least expensive of the three. Once hired, she will remain in the party until she is killed in battle.

Ozou has the same general appearance as the "Miko" type of enemies encountered throughout the game, being a young girl whose eyes are covered by her hair making a confused expression. Her distinct shaggy brown hair and pink kimono are entirely unique to her, and help differentiate her from enemies of the same type.

Described by her profile as a "Dull Bodyguard", Ozou appears to be fairly lazy and unmotivated. This is further supported by her speech patterns, which are lilting and lackadaisical. Despite this, she actually boasts the highest natural intelligence score of all the playable characters, suggesting that she is more eccentric than outright stupid. This is further supported by her hobby, which is listed as reading. Her profile mentions that she is "Motivated, really!", and she states that she will try her best during her introduction, showing that she always works hard despite her lazy demeanor and general incompetence.

While Ozou is not a particularly skilled fighter, she is not completely worthless either. Though the majority of her stats are quite low, they are still generally better than her fellow mercenary Suteroku, with her intelligence in particular being impressively high. These abilities are wasted, however, as, despite being of the miko class, she possesses no magical skills, instead relying entirely on her incredibly low attack stat to fight her enemies. As a result, she is not very useful in combat despite having a decent amount of potential to be.

In battle Ozou relies on slapping her opponents with a tree branch. These slaps are weak and unreliable, doing either low damage or missing her foes completely. Her only other attack is substantially more useful, being a simple kick that has a small chance of making the target lose their next turn in battle. 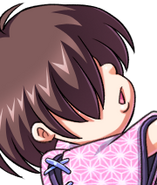 Ozou's portrait in Three for the Slash! Thrust! Burn! 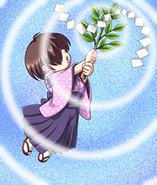 Ozou's battle portrait in Three for the Slash! Thrust! Burn!