Orochimaru is the Blue Guardian of the Tetra Sealers and guardian of the Seiryu Castle. A bit of a wild and crude man, he loves a challenge, eager to show off his battle prowess which he is trying to improve. Though he truly seeks to bring about Noroi's goals, he usually puts his own passions before them. He is the most recent addition to the Tetra Sealers, and as such is actually fairly inexperienced. However, he is brave and honorable, and only grew hateful enough for Noroi to grant him power after a traumatic experience. He has a bit of an on-going rivalry with Haruka. Though trained to the sword by Ittou Hagane, he uses a weapon called the Liberty Scythe in battle.

In his earliest years, Orochimaru grew up without any friends or family. Though he lived with a monk for a while, who imparted into him a strong sense of honour, the man died fairly shortly after, and Orochimaru was forced to steal or even eat things like spiders or tree roots in order to survive. Despite those trials, he stayed optimistic, however this all changed when one robbery went terribly wrong. Apparently, the mansion he had targeted was an usual target of thieves and had started to lay traps. When they caught him, they believed him to be the thief constantly robbing them, and viciously beat him until he was completely crippled. Orochimaru was then forced to crawl and eat grass, and though many came across him, no one deigned to help him. Eventually Ensai, sensing his growing hatred for humanity found him and used Noroi's power to heal his wounds. Ittou Hagane then taught him the ways of the sword until he could become the newest member of the Tetra Sealers.

He was later tasked with stealing the Time Leap Bell from a village under the protection of the Crescent Moons, and though he succeeded, Haruka and Subaru chased him and started invading the headquarters. After Haruka managed to defeat Kikyou-Dayu, Orochimaru stood in their way. Though he could easily take Haruka, Subaru intervened, and inexorably managed to drive him into a corner. He would have been slain by Subaru then and there, had not Ittou Hagane arrived and covered his retreat, allowing him to do the time-jump with the others.

In the present, he was sent out with a cadre of genins to find and bring back the current Dragonian, so they could use his power to bring Noroi back to his full strength. However, this attempt was cut short by the arrival of Haruka and the Crescent Moons led by Seigen. Though he could at first easily handle the young Blade, when revitalized by Dragon Synergy with Takamaru, she managed to fight him off long enough for the Crescent Moons to employ their secret plan : a powerful seal was activated, which brings excruciating pain to all who have been given power to Noroi. As such, Orochimaru and the rest of the Noroi Faction was forced to retreat, but not before kidnapping Seigen and some of the ninjas he was fighting with.

He is later seen frustrated due to his inability to leave the base and eager to have his rematch with Haruka. As the weakest of the Tetra Sealers, he is the first to be sent back to the world under the protection of a Mark created for him by Ensai in the hopes that his Tetra Castle can weaken the seal enough for the Faction's return. However, his castle is quickly invaded by the two Blades Haruka and Narika who proceed to defeat him.

As the Castle dissipates Orochimaru declares that he will train harder until he can defeat Haruka. As the Blades decide to apprehend him, he is stabbed from behind by shurikens thrown by Subaru. Though Haruka is overjoyed to see her, Orochimaru states that she has been corrupted by Noroi just as she snatches his Mark from him and puts it on herself. Despite this he is brought back to the Crescent Moon headquarters where he is taken care of by the group despite Arika's plans to torture him for information. He eventually tells him of his reasons for joining Noroi, and though he is angatonistic at first, he slowly starts enjoying the Crescent Moons's company. As Subaru makes a Tetra Castle appear, he is surprised to see that she is using Ittou's castle Byakko instead of the deceased Kikyou-Dayu's castle. Before the Blades's fight with her, he tells them of the outside Mark which should be her protection. As the Blades manage to take out the Mark and Subaru remains unaffected, Orochimaru realises that the true source of Noroi's power is in her surrogate right arm which Haruka proceeds to slash off. Subaru then faints as the arm takes the form of Kikyou-Dayu who then retreats to her own Tetra Castle. As the Blades plan to attack her own castle, Orochimaru deplores her cruel tactics and warns them that she probably has yet some tricks up her sleeve. Following her defeat, he decides to see more of the world and goes to the Crescent Moons's village to interact more with the rest of the ninja group. 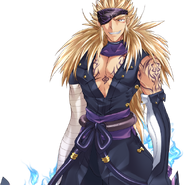