Oosugi Tsuyoshi is a former executive member of the Wakame Group and the combat instructor of Yamamoto Akuji.

Found abandoned in the streets of Osaka in the year 1934, Oosugi was taken in by the Wakame Group as an infant. Lacking any memory of his previous identity, he was given a name and ordered to begin working for the organization as an errand boy. Oosugi quickly entrenched himself within the yakuza lifestyle, eager to do all that he could to support his newfound family. To the surprise of all around him, he revealed himself to be in possession of both physical strength which bordered on being superhuman and a natural aptitude for fighting, causing him to steadily begin getting called upon as a combat specialist by his superiors. Oosugi's outstanding skill and unflinching loyalty made him a strong and reliable subordinate, leading him to rise through the ranks of the Wakame Group at a breakneck pace.

In the year 1950, Oosugi was given the duty of serving as the bodyguard of Akuji, the grandson of the Wakame Group's leader Yamamoto Ippatsu. Honored to be entrusted with protecting his future leader, Oosugi took the job very seriously, and accompanied Akuji almost everywhere. When Akuji came of age, Oosugi began working as his combat instructor, and diligently trained him in the art of karate. Akuji's talents flourished under Oosugi's tutelage, and eventually grew to become a warrior comparable to his trainer.

In the year 1971, Akuji, along with several other members of the Wakame Group, was drafted into the Nihonese Army to defend the country from the invading nation of Wime. Due to not being a registered Nihonese citizen, Oosugi was unable to enlist and follow his young master into the war, and was instead ordered to watch over Haku Minka, Akuji's girlfriend, in his absence. Oosugi attentively followed his master's wishes until three years later, when the Wime Army successfully occupied Osaka and enforced the policy that all local organizations had to be controlled by women. As a result of this new law, leadership of the Wakame Group shifted to Ichihashi Ran, one of Ippatsu's countless lovers, who immediately began to radically alter the group's activities. Oosugi's loyalty to the Yamamoto family branded him a potential threat to Ran's leadership, which caused him to be removed from his position and imprisoned. Despite possessing the power necessary to escape with ease, Oosugi was disinterested in working under anyone outside of the Yamamoto family and chose to placidly remain in confinement.

During the events of Daiakuji, Oosugi learned that Akuji had returned to Osaka after being released from a Wime internment camp and taken control of the Youth Service Group, a small community service organization, with the intention of overthrowing Ran's as leader of the Wakame Group. Wasting no time to reunite with his master, Oosugi broke free from his imprisonment and traveled to the Youth Service Group's headquarters in the Midorigaoka district to request to join it. While his intimidating figure frightened many of the service group's members, he was hired without hesitation by Akuji, who believed that his fighting ability would make him a valuable asset. From then on, Oosugi remained by Akuji's side, tirelessly doing all he could to support his master in his conquest of Osaka.

If Yamazawa Asami is recruited into the Youth Service Group's forces and stationed together with Oosugi, the two will quickly bond over their similar dispositions, with Oosugi praising Asami's unrelenting pursuit of bringing criminals to justice and Asami growing to admire Oosugi's straightforward and honest personality. This bond quickly blossoms into mutual attraction if the two continue to be placed together, but is stalled from progressing further due to both considering themselves for various reasons to be unworthy of the other. Akuji eventually catches on to the pair's budding romance after Asami arrives uncharacteristically late to a meeting with him after losing track of time while training with Oosugi. Unable to get Asami to admit her feelings, Akuji orders Oosugi to come to the meeting and tell him whether or not he is in love with Asami, to which Oosugi admits that there hadn't been a moment since their first meeting when she hadn't been on his mind. To Akuji's frustration, Asami still hesitates to begin a relationship with Oosugi, claiming herself to be too weak of a person for his love for allowing her body to become corrupted by drugs and dependent on pleasure to continue functioning.

In order to convince Asami of her inner strength, Akuji challenges her to a contest in which she must refrain from having an orgasm for one hour while having sex with him. While Asami is initially aghast by the proposition, she is pushed into agreeing to it after Akuji claims he will forbid her from being any closer than a kilometer from Oosugi if she either lost or refused. Asami is pushed to the brink of madness with pleasure while in bed with Akuji, but succeeds in enduring his technique for long enough to win the bet. With her confidence in her self-control restored, Asami immediately rushes to Oosugi and the two begin dating.

If both Oosugi and Asami survive through the Youth Service Group's conquest of the Wime Army's Eden base after becoming a couple, Oosugi will successfully register himself for Nihonese citizenship, allowing them to get married. Ecstatic, the two embrace in the middle of a crowded street and begin discussing their future together.

Oosugi is a large middle-aged man with tan skin, short-cropped black hair with a matching set of thick black eyebrows, broad features, and a robust physique. He is considered to be quite intimidating in appearance, but is noted by Aoba Youko to have surprisingly round and gentle-looking eyes. Oosugi’s clothing consists of a light brown long-sleeved button-up shirt tucked into a pair of black slacks and a red tie kept in place by a copper pin.

A man defined by his loyalty to the Yamamoto family, Oosugi is a strong and straightforward individual who dedicates everything in his power toward tirelessly supporting his superiors. As the Wakame Group is the closest thing to a family he has ever known, his devotion to its leaders is unshakable, and he will follow their orders without question regardless of what they are. While he is a firm believer in the ethos preached by most yakuza, such as trusting in money more than one's own allies, he is nonetheless a fundamentally goodhearted person who sincerely considers organized crime to be capable of maintaining peace and order in ways that more traditional forms of governing cannot, and abstains from partaking in unscrupulous activities such as soliciting bribes from the territories under his organization's protection.

As a result of his personality and upbringing, Oosugi rarely makes any time for himself within his work and lives a rather ascetic and solitary life when off duty. Though he is mostly unashamed of this, he is somewhat embarrassed to still be single at his age, and gets nervous when the subject of romance is brought up around him. He is also surprisingly naive to the world outside of gang-related business, and reacts to such things as going to an amusement park with a combination of boyish innocence and enthusiasm.

Oosugi has served as Yamamoto Akuji's subordinate and combat instructor since the latter's birth, and the two share a close bond with each other as a result. Akuji considers Oosugi to be among the strongest people he has ever known, and holds him in high enough regard to trust him with deeply personal matters such as protecting his girlfriend while he was away in the army. While their relationship does not quite shed the formalities tied to that of a master and servant, Akuji is shown to possess a clear affection for Oosugi on several occasions, even maintaining a vested interest in his love life for no reason other than genuine concern. Similarly, though Oosugi is normally completely subservient to Akuji, he will make momentary exceptions when advising him on romantic relationships, even voicing concern at the prospect of Akuji maintaining a relationship with Henri Pelori due to considering her to be an "evil woman". Overall, Oosugi seems to be one of the few people in the world who Akuji seems to honestly care about, if only because of his value as a subordinate.

Oosugi shows an immediate respect and interest in Yamazawa Asami upon first meeting her, expressing admiration for her drive to put Dr. Suteki to justice even after being removed from her position as a public servant. His feelings grow increasingly more romantic in nature as the two begin spending more time together, but he avoids acting on them out of fear that the considerable age difference between them would make them incompatible as a couple. When ordered by Akuji to state his feelings for Asami, however, Oosugi earnestly admits that he loves her with all of his heart, a gesture that inspires her to confess her own feelings for him and pushes the two into starting a relationship. Oosugi further displays his love for Asami soon after the Youth Service Group's occupation of Eden, where he applies for citizenship, something that he had neglected to do for his entire life up to that point, for the sake of being able to marry her.

An extraordinarily powerful person, Oosugi has displayed a knack for fighting since childhood, and is noted to possess a level of physical strength and combat ability that far surpass the already above-average talents of the typical Nihonese man, with his punch alone being stated to contain enough force to shatter a brick wall. Oosugi's power served as the foundation of his executive membership within the Wakame Group, where he was regarded as one of its two strongest combatants. Not even Oosugi himself is certain how he acquired such phenomenal physical abilities, though he has little interest in uncovering the reason why.

Oosugi is a master practitioner of the art of karate with decades of fighting experience under his belt. His fighting style is equal parts ferocious and observant, and he is particularly talented at reading his enemy's movements in order to pinpoit their weaknesses. His signature technique is an attack known as Tsuchiryu, in which he charges at his opponent at extreme speeds to deliver a devastating headbutt. Oosugi's skills extend beyond his individual ability, as it was under his expert instruction that Akuji was able to hone his talents enough to become a master in his own right. Akuji and Oosugi are roughly equal to each other as combatants, though Oosugi's technique places slightly more emphasis on force and endurance while Akuji's focuses on speed and dexterity. Oosugi remains one of the few people capable of matching Akuji in combat even as his student has matured into adulthood, making sparring sessions between the two a mutually beneficial experience.

Outside of battle, Oosugi is an experienced public administrator who is well-versed in structural management. While his skills pale in comparison to those of Shimamoto Jun, he is nonetheless capable of adequately generating revenue from the areas that he is stationed in while also maintaining public order within them, making him fairly reliable as a non-combatant. 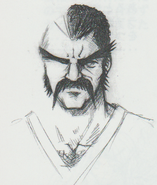 Oosugi's appearance in the Daiakuji: The Xena Buster OVA series.