The Oni are a male-only species that were created to be servants of the Gods that are tasked with the mission of purifying the Souls of mortals in the afterlife, a job extremely important for the Reincarnation Cycle that allows life to exist in The Continent.

They all live in Hell and, since female Oni don't exist, mostly make use of common human females as brood mothers to increase their numbers. Most Oni have similar body structures, large and muscular with a tail. There are some Oni variants that look wildly different, however. The Oni take great pride in lumps and protrusions on their bodies, if you're an Oni with a protruding chin or a massive lump of flesh under your chin, then you'll be in a very respectable position amongst your fellow Oni. They have eternal youth, but they are not immortal. If they dare venture into a combat situation they can be killed, though they are significantly stronger than the average human, and the strongest Oni are tremendously powerful foes that perfectly rival Dark Lords in strength.

Their job is to format Souls of all personality information, to reduce them to an acceptable blank slate via torture, and then send them to Ludo-Rathowm to reincarnate again. They have less freedom than Angels do, and are not able to travel to the Continent freely. Many renegade Oni try to leave Hell anyway, these are usually the troublemakers found on the surface.

The Oni work to purify Souls. It's a strenuous and tedious job, but it must be done as dirtied souls are incompatible with the Whale God. The job was originally performed by Angels, but the purification of polluted souls often pollutes the souls of the one administrating the purification, so they gave the dirty legwork aspect of the job to the Oni, the Angels now work in the office sections of Hell, handling paperwork and administration. Some Onis that are called "Unlucky Onis" are stained and polluted themselves from the overexposure of the task. Angels dispose of these in secret.

Souls are polluted and dirtied by feelings of self-doubt; anger, sadness, fear and pain all cause the soul to become polluted. The average soul is around 30%-50% polluted in a single lifetime, they are quite difficult to purify. The more polluted a soul, the harder and more time-consuming it is to clean it, people typically kill themselves upon reaching 80% soul pollution. Oni cannot purify souls that are 100% polluted, these souls go to waste and cannot be returned to Ludo-Rathowm.

It's normally impossible to escape from Hell, so most Oni dutifully perform their jobs, but every so often someone might escape to the surface world and cause some mischief. Sometimes dirtied souls left on the surface will clump together and become large, malevolent Oni, but most of the time a Devil will come along and collect those souls before that has a chance to happen.

Oni in the Continent[]

The shockwaves created when JAPAN first split from the mainland Continent were so powerful that they caused holes that lead directly to Hell to sprout up all across the nation, the largest of these holes is in Shikoku (Death Country).

Thousands of renegade Oni came forth from the Hell Holes, ravaging the surrounding area and causing trouble for the humans there. Goddess Amaterasu, administrator of Hell, gave several gifts to the JAPANese to apologize for this; the Tenma Bridge, Miso Soup and the title of Emperor. The Three Sacred Treasures required to become Emperor were originally the property of the Oni. Ishimaru Fujiwara ventured into a Hell Hole and stole these from the Oni, becoming the first Emperor of JAPAN.

A Red Oni in Sengoku Rance. 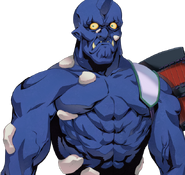 A Blue Oni in Sengoku Rance. 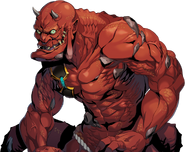 A Red Oni in Rance X. 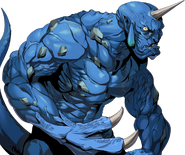 A Blue Oni in Rance X.

A Green Oni in Toushin Toshi 2.

A Yellow Oni in Toushin Toshi 2.

A Black Oni in Toushin Toshi 2.

A White Oni in Toushin Toshi 2. 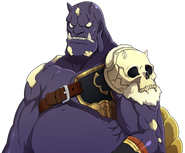 The Oni King as he appears in Toushin Toshi Girls Gift

Full body image of the Female Oni Sakuya as she appears in Toushin Toshi Girls Gift
Community content is available under CC-BY-SA unless otherwise noted.
Advertisement