Omachi (short for Machijoten) is the Northern Guardian of the One Eyed House. She was previously the 2nd Youkai King, known as Her Knowledgeable Highness the Nine-tails Fox, the Wildstar (狂星九尾・未知女殿, Kyōsei kyūbi Machi-joten), and led the Great Youkai War against the humans.

She became Youkai Queen sometime into the GL Era, long after the first Youkai King, Kurobe's disappearance after his (temporary) death while fighting Nigchisa's demon Xavier beside Fujiwara Ishimaru. The period between the two kings resulted in fragmentation of any youkai cohesion, which was already quite loose in Kurobe's time, as he prized authority through strength in battle.

Scattered and feared by humans, the youkai had been vilified, leading to the Youkai Queen to seek 'liberation of the youkai, and a return to a glorious kingdom from the past. Banding together under the intellectual and charismatic leader, the youkai army that Omachi started a violent war with the humans of JAPAN, with the objective of cleansing humans and making JAPAN a kingdom of Youkai.

Many Youkai that hated humans sided with Omachi, but not all of them agreed with her, which led for another faction of Youkai commanded by Dokuganryuu Masamune to appear. Unlike Omachi, Masamune wanted to have peaceful relations with humans and he allied with other human-led Houses to battle the Youkai King.

After she was defeated by Masamune, she fell in love with him, stepped down as the Youkai King, and faithfully followed Masamune from then on. She's arguably the wife of Masamune that loves him the most at present. With time, she became aware of the suffering she caused in the Great Youkai War and doesn't like being in Owari because she was responsible for the death of the father of Kouhime and Nobunaga.

This might not be the entire story though, as Kou has said in reference to Omachi that "she didn't want to do what she did. It was fate or something". This could imply there was another power at work behind Omachi and the Great Youkai War.

Still, the Great Youkai War caused youkai to be even more feared by humans, as so many lives were lost in the extremes Omachi went to trying to secure victory. Probably her most famous, ruthless and insane move was the release of the Forbidden Youkai, the Soul Binder, which brought a terrific curse that spreads like an epidemic, which took the lives of countless people. She was eventually defeated by an alliance of One Eyed Masamune with the Oda House.

In battle, Omachi's powers are absolutely terrific, being an extremely proficient and talented user of the Yin Yang arts. She relies mostly in using thunders to crush her opponents, and all her attacks cover a huge range while being pretty devastating as well. Her biggest weakness is that she's pretty fragile and immobile, but when given a proper back-up and cover, she can easily destroy armies by herself.

During the events of Sengoku Rance, when the Oda House led by Rance declares war to the Youkai country to the northeast, she eventually leaves Masamune's side for a while to take part in the battlefield as a commander. Despite possessing incredible power, she was defeated by the opposing army and turned into a stone. After the war was over, Masamune turned her back to normal and joined the Rance's Army, seeing that Masamune joined him as well after the war was over. 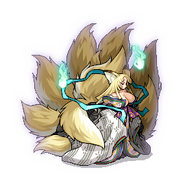