She first appears wearing the blue Shinsengumi uniform when the "Hanny King" (Imagawa Yoshimoto) visits Kyo. She looks sick and seems to be relying on her katana to stand steady. She also wears glasses and has an ice bag tied on top of her head. During the events of Sengoku Rance, she was tricked into killing Rance but failed, coughing blood instead. Her illness was later revealed by 3G to be the curable cough cough disease (the real world equivalent being tuberculosis).

In Kenshin's route she is one of the candidates in the Emperor Race. 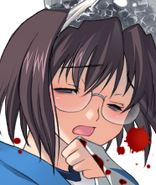