AliceSoftWiki
Register
Don't have an account?
Sign In
Advertisement
in: Articles with Major Spoilers, Characters, Male characters,
and 4 more

Ogawa Kentarou is a human from Japan of Dimension 3E2 (Japan of modern day Earth, not to be confused with JAPAN in Rance World). He is a childhood friend of Kurusu Miki (Little Princess), but he is ignorant of her romantic interest in him. He is the wielder of the Holy Sword Nikkou. Formerly practiced Kendo in 3E2 (which explains his sword skills).

During the events of Sengoku Rance, he was heavily wounded by the Apostle Seiryuu and became a Dark Lord after Miki gave him her demon blood in order to save him.

Kentarou is an outgoing, goofy and friendly individual that lives his life careless and optimistically. He's very nice and kindhearted with everyone, including strangers. He's very naive though and doesn't realise when someone is using him or taking advantage of his friendly disposition.

His personality contrasts a lot with Rance's, something inevitable due to their complete opposite personalities. Rance doesn't like him, but Kentarou thinks of him as a nice and helpful person. He often takes his advices and opinions very seriously (even when Rance is just making a fool of him).

He's not very bright, usually making mistakes that would be avoided with common sense. He's also completely oblivious to how others think or feel but doesn't think about it too much either and is usually the only one shocked and surprised over trivial and obvious things. He sometimes acts or talks in a way that many find him weird, like fighting in a very bizarre and flashy way, naming his attacks, making victory poses(and naming them too), say that it's time to have a flashback aloud, among other things.

He does legitimately care about his friends and those around him though. He cares dearly for Miki, and will do anything to protect her.

He has a short brown hair and seems to retain his old clothes from his original world, wearing more modern and casual clothing. Above it however, he's protected by some light armor he's found in his journeys around The Continent. He usually keeps his sword, the holy katana Nikkou, hidden and protected with some sort of big bag and is always carrying it with him.

He won the state championship of Kendo at the age of 15 in his world. This experience in Kendo is the foundation of his current swordsmanship and helped him adapt quickly to the fighting in The Continent. He's very skilled with the sword and has Sword Combat Lv2 skill.

While efficient, he has a pretty weird fighting style. While his swordsmanship is certainly impressive, his moves and weird decision making tend to confuse his opponents. This makes him more unpredictable though, so it's not a bad thing. During the events of Sengoku Rance, he managed to learn a unique skill of his own, which was named by Miki the "Kentarou-kun Slash". While the name is pretty bad, it's a powerful attack rather equal in strength to Rance's iconic Rance Attack.

Before turning into a Dark Lord, he had a level cap of 100, which is one of the highest caps for any human in history, and his current level by LP0005 was 45, making him a very competent fighter. He also wields the Holy Katana Nikkou, which is one of the only two swords capable of shattering the invincibility field of the Dark Lords. Unlike Rance however, he's not strong enough to take down a Dark Lord yet and has a lot to learn. In Sengoku Rance, he was incapable of defeating a half-awakened Xavier even with the holy katana and with the help of Seigan, and was defeated rather easily.

After he was turned into a Dark Lord by Miki, he gained an invincibility field, which allowed him to fight more recklessly and carelessly. As he has only recently become a Dark Lord, however, he has yet to develop any additional abilities and his strength is more or less the same as it was when he was still human.

Five years ago, he confessed to his childhood friend Miki, and they became a couple. But one day on way back home from their date, Demon King Gi(in the original game he's called Dracula) shows up and kidnaps Miki through a dimensional gate. Kentarou chases after then through the gate, and ends up in this universe.

He found himself in an unfamiliar land, but being used to the fantasy world through video games, he quickly found himself at home. Being a winner of a state championship in Kendo, he was already adept with the sword, and got stronger and stronger as he approached Gi's castle.

On the way, he encounters a party of strong adventurer, one of which was wielding the Holy Sword of Nikkou. The party was wiped out and the warrior died leaving Nikkou in the hands of Kentarou.

Kentarou finally finds himself in front of Gi, but Gi does nothing to stop the blade, and dies at the hands of Kentarou willingly. The two escape the castle, but the passing on of the Demon King blood was already completed.

In Little Vampire Miki is kidnapped again by the Dark Lord Berksham, but Kentarou manages to trap Berksham and rescue Miki.

In the end of this Little series, the two finds the way home to the dimension 3E2, and happy end. However, these two games are placed as a "prototype" to the Rance universe, and so the story diverges from here. In the canon story, the two did not return to their world, and are still looking for the way home.

He is mentioned by Miki when you meet her in the castle.

He only appears in the storyline.

He was severely hurt when running with Miki and Nikkou and they seek shelter in Leazas's castle. This result in Kamilla leading a few other demons attack Leazas to get Miki back.

He appears along with Miki, still looking for a way to stop her from becoming the Demon King. During the course of the game, he is mortally wounded by one of Xavier's Apostles. Miki saves his life by turning him into a demon, strengthening him in the process (permanently).

MIki and Kentarou in Rance VI 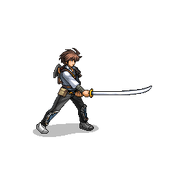