Note: This article describes the Oda Nobunaga from the non-canon Kichikuou Rance. For the canonical version of the character refer to Oda Nobunaga.

Oda Nobunaga was the Emperor of JAPAN, the smallest country on the The Continent, which is kept afloat by connecting to The Continent with the Tenma Bridge. He rose to power after a fierce civil war, resulting in the eradication of all opposing JAPANese houses, leaving himself as the only remaining Lord.

Some time prior to the events of Kichikuou Rance, Oda Nobunaga, Lord of the Oda House, came across Dark Lord Xavier. Xavier's lust for bloodshed had long been a menace to the JAPANese people and the demon had been sealed for several centuries by the Tenshi Sect. Nobunaga's thirst for power made him give in to the Demon's seduction and he decided to consume Xavier's Demonic Blood Soul. Oda Nobunaga was reborn as a Dark Lord upon overcoming Xavier's will. With his newfound power Xavier was able to crush all opposing Lords and managed to conquer and unify JAPAN under his name, becoming Emperor.

Nobunaga makes his first appearance in Kichikuou Rance after Leazas, under the leadership of the recently crowned King Rance, conquered all the Free Cities and reached Portugal, the City State adjacent to JAPAN. His trusted subordinate Shibata Katsuie initially wanted to wage war with Leazas, expanding their Empire towards the mainland, but Nobunaga decided to form an alliance with the larger kingdom. Shibata was sent as an emissary to negotiate with King Rance. The player's choice will influence JAPAN's actions: Rance will either accept the alliance or reject it, however, accepting will require handing over Leila Grecni to serve as Nobunaga's concubine, resulting in permanently losing her and serving as her Unhappy Ending. Additionally, Nobunaga will still declare war against Leazas soon afterwards, breaking the agreement. Rejecting the alliance will result in an immediate war against JAPAN.

When at war with Leazas, Nobunaga employs brutal tactics against the invading armies - mostly brutal to his own people. He regular spurs untrained civilians to stand against Leazas' military in hopes of gaining time for his army to regroup. Eventually, after Nagasaki is conquered by Leazas, he will appear as a Commander in the battlefield to defend the capital at Osaka, revealing his true nature as a Dark Lord. Because of his status as a Demon, Dark Lords Meglass and Satella, who had refused to fight for Leazas in wars between humans, will agree to fight for Rance upon discovering Nobunaga's real form. If Nobunaga is successfully able to defend against invasion, that night he will send his two top ninjas Gekkou and Shinobu to assassinate key figures within Leazas. Gekkou will attempt to assassinate several Generals, such as Rick Addison and Cordoba Burn, but will only succeed if they've been deployed in battle and are exhausted as a result. Shinobu will go after Rance's instead and will succeed if Rance fought on the battlefield as well. Eventually, despite his immense power, Nobunaga is killed in the battlefield. JAPAN falls and ends up annexed to Leazas after the war's end.

He didn't make appearance in the canonical timeline but it is known that he existed though his transformation into a Dark Lord never took place. Prior to the events of Sengoku Rance served as the previous head of the Oda House and the father of Oda Kazusanosuke, Oda Kou, and an unnamed eldest son who was his heir. In the year GI1012, he participated in the Great Youkai War after forming an alliance with One-Eyed Masamune, waging war against the Youkai King Omachi. During the conflict he and his first son would eventually lose their lives, forcing Kazusanosuke to become the Head of Oda and replace him, inheriting his name of Oda Nobunaga in the process.

A Dark Lord with the appearance of a middle-aged man in a kimono and JAPANese armor, Nobunaga's was easily confused with a regular human. He had long brown hair tied into a ponytail and fierce red eyes. Nobunaga was a very fit and muscular man, having spent the majority of his life as a warrior on the battlefield. He had tan skin and often wore a slightly sadistic smile. He was always seen with his loyal pet monkey Toukichirou on his shoulder, who accompanied him even into battle.

His personality exhibited the ruthlessness of of a Demon. Nobunaga ruled as a cruel and merciless despot, holding no feelings of empathy towards his subjects. JAPAN's bloody unification served as a time of great enjoyment for him. He is known to keep his enemies' heads on a wall in his private room and regularly drank from their skulls. By human standards, he resembled a sociopath with no compassion. He considered anyone who opposed him to be a fool deserving to be crushed. Nobunaga would sacrifice the lives of his subordinates with no hesitation, believing it to be their duty to give their lives for their lord. He's cared nothing even for civilians, having no reservations sacrificing them to give his armies a slight advantage in war. He disliked foreigners, seeing them all as possible threats that wished to take the country he built through bloodshed. He's also rather lecherous with women, having openly admitted to the sexual abuse of countless women and showed little remorse for it.

Despite all these savage traits, Nobunaga remained a rational leader. He showed a willingness to negotiate and form alliances to empower his forces. He was a smart and charismatic commander that knew how to lead his subordinates with efficiency. While willing to send any subordinate to their death with no second thought, Nobunaga had respect for his soldiers.

Despite the many rapes he committed he only had one child survive until birth, the princess of JAPAN Kouhime. His relationship with her is rather complicated. It is uncertain if he has a genuine human love for her, but he has shown signs of paternal responsibility. Kouhime, unlike her father, is an incredibly compassionate and kind woman who is terrified and saddened by her father's cruelty. Nobunaga had a hard time dealing with her, as he was incapable of understanding such feelings.

Nobunaga was an experienced Warlord, having fought countless battles in a long civil war. Over the years he opposed an conquered numerous enemies. His strength and talent for warfare were tremendous, being a formidable warrior and a decisive leader. As a human, he was adorned in heavy armor that few warriors would be able to move in, which granted him a high defense against physical attacks. His wielded a spear in combat with outstanding skill, boasting a Spear Combat Lv2, a rare talent.

Upon becoming a Dark Lord his strength reached new levels, gaining an Invincibility Field that allowed him to fight against entire armies on his own and still come out victorious. After his transformation his Level Cap rose to the absurd limit of 200 and by the events of Kichikuou Rance he'd already achieved a Level as high as 89. He also gained some control over fire and was constantly surrounded by flames on the battlefield. With Nobunaga's new abilities, his already impressive strength had risen to place him as one of the strongest fighter's in the world. He was surpassed only by the world's strongest foes, such as the Four Elite Dark Lords or Rance. 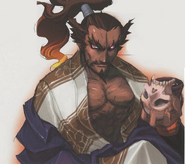