AliceSoftWiki
Register
Don't have an account?
Sign In
Advertisement
in: Articles with Minor Spoilers, Characters, Female characters,
and 3 more

Noir is the Eastern Guardian of the One Eyed House and one of the four wives of Dokuganryuu Masamune, who she greatly loves. While she's usually harsh and easily irritable, she also has a very affectionate side that usually tries to hide.

During the events of Sengoku Rance, when the Oda House, under the leadership of Rance, declares war to the One Eyed House, Noir will be deployed as a commander after several battles are fought. She will talk with Masamune, expressing her anger towards the humans of the Oda House that have killed many Youkai, and claiming that she's going to make sure to slaughter a bunch of enemy humans in the battlefield as retaliation. Masamune calms her down, claiming that the death of one's comrades is something painful for both sides and if she's hurt for the death of the Youkai of their Army, then she should be able to understand others grief. He manages to convince her to allow enemies that are trying to retreat to do so safely, as they have no wish for fighting and killing them would be just brutish. Noir doesn't want to do it, labeling it as "bothersome" but states that if Masamune asks her she has no choice but to do so.

During the war with the Oda House, she's eventually defeated and captured by Rance, who roughly rapes her immediately after her defeat as she was being violent and aggressive. Rance later convinces her to join the army when told that it would be either that or rot in Oda's prison forever, being left with little choice.

After the Sengoku Era is over, she leaves JAPAN (with one of Orochi's scales) in order to see the rest of the world. She can be found in Leazas's castle in a certain quest in Rance Quest and re-encounters with Rance.

She returns in Rance X, to help fight the Kayblis Faction. If Gatia is recruited to their forces, she will become acquainted with his Apostle Lauren, due to their shared similarities to spiders.

Noir is a spider Youkai, having a humanoid appearance with some spider-like traits. She has a four limbs coming out of her back, and a total of 6 eyes on her forehead that resembles those of a spider, but these are things that could even be mistaken for accessories by others and looks very similar to a regular human female without those. She has a long purple hair and wears a leotard with soft fluffy parts attached to it, coupled with thigh high boots with heels.

Her personality is simple and straightforward, she's blunt, harsh, easily irritable and with little patience. She swears a lot as well, especially when she's pissed off, which is often. However, this is mostly just the way she acts, but over time reveals to have a softer and more caring side. She's very grumpy and extremely unusual for her to admit her affection, but once she grows fond of someone, her personality shows a nicer demeanor, but also becomes extremely possessive as a result. In Sengoku Rance, she would proclaim ownership of an affection raising item when given to her.

While she doesn't admit it herself, she is the wife of Masamune that likes Rance the most. She's pretty violent and hot-blooded as well, being easily driven by her emotions in the battlefield, usually by feelings of anger or plain annoyance. Oddly, she seems to be masochistic and enjoys being abused, although she would never acknowledge it. When Rance raped her, he was annoyed because she brought him a lot of trouble and was constantly insulting him, so he decided to be much more rough than usual, thrusting a dildo deep onto her rectum while penetrating her vagina. He was surprised to find her to be really aroused and teased her for being a pervert, which led Noir to only blush without being able to refute it, though she continued to insult Rance out of irritation for not being able to admit that she was finding pleasure in the abuse. Furthermore, after Noir was recruited into Rance's Army, she showed clear signs of being romantically interested in him, to the point she started stalking him, but she would still act hostile towards him and claim to hate him.

Befitting one of the Four Guardians of the Youkai King, Noir is a very powerful fighter with great commanding skills. In battle, she fights by wielding a sword with great expertise and power, and her ability with the sword borders with that of a Level 2 Swordsman, as she's capable of learning many high-tier sword tecniques.

Her most unique and notorious ability is her ability to create and employ spider silk for battle, forming webs to trap her enemies or restrict their movements. These threads are incredibly hard, as she claimed that even Masamune had trouble cutting it in the past. When she attacks, she always mixes her offensive with her threads, restricting the movements of the enemy and preventing them from dodging any attack from that point on. She's also extremely effective at capturing enemies thanks to this skill.

Her biggest weakness is her extremely low magic resistance, being particularly vulnerable to magic attacks and taking greater damage than usual. It seems to be related to the fact that, as a Youkai, her very existence is tied to Orochi. While Youkai can leave the country by carrying one of Orochi's scales, the separation still seems to reduce his influence over them, reducing their magical resistance as a result. She still carries the natural advantages of being a Youkai though, having very high resistance over physical attacks and being an extremely hard opponent to kill. 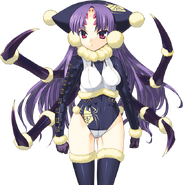 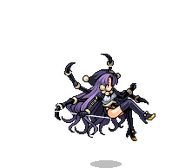