AliceSoftWiki
Register
Don't have an account?
Sign In
Advertisement
in: Articles with Major Spoilers, Articles needing a Quote, Characters,
and 9 more

Noce is a powerful Elder Dark Lord from an old forgotten era, originally born as an Earth Dragon, Noce was turned into a Dark Lord by Demon King Gele and vowed loyalty to her, which he maintained even after she was defeated and sealed.

He was one of the four elite dark lords during Gele's era, but stepped down after Gi became the Demon King to keep a low profile. He later spent the following centuries training himself for the time when he would be able to release his master and fight for her once again. After civil war broke out in the Monster Realm, he joined the Hornet Faction, solely because he thought they would be easier to manipulate in his plans to free Gele from her imprisonment. He claimed to be loyal to Hornet but this was all a farce and was secretly plotting the return of Gele. In reality, he cares little about both Hornet or Kayblis, although he does see Little Princess as an obstacle in his plans, since a time where there's no Demon King is a perfect occasion to set his plan in motion to release Gele.

During the events of Rance 03, he served as one of the main antagonists, allying with Prince Patton from the Helman Empire and assisting him in his invasion over Leazas. He convinced Dark Lords Ithere and Satella to leave Hornet's side and help him in the invasion, claiming that there was a powerful weapon in Leazas that would give them the upperhand in the war against the Kayblis Faction. His plan was to invade Leazas and search for Chaos, the item keeping his master sealed in an Alternate Dimension, and used both, the Helman Empire and the Hornet Faction to achieve this.

Noce was completely loyal to Gele and was plotting the way to release her since the day she was taken down by Gi. He had a very scheming and cruel mindset, usually backstabbing allies or individuals he believed could potentially diverge his plans to a direction he doesn't want. He uses others like tools to advance with his plans and got rid of them once he didn't need them anymore, caring about no-one except himself and his master. He showed no concern even for other Dark Lords and used the Hornet faction for his own benefit. He claims loyalty to Gi, but this was nothing but a farce to get a chance to free his real master, and cares little not even about the conflict in the Monster Realm.

He was a malevolent schemer that would use everyone for his own purposes and killed them when they are not of use anymore with no regrets. The only one he cared about was his master Demon King Gele, however this feeling wasn't mutual at all since after she was revived she didn't seem to care about Noce at all and barely acknowledged his existence.

He had a huge body of 283cm tall and his body was hard and tough like a rock and weight 500kg total. He was very corpulent and muscular, with very big arms and fingers and clawed teeth. He usually hid his body with robes when he wanted to deliberately go unnoticed. He had something that resembles a red cristal on his forehead and a big mustache.

Noce was certainly a very powerful individual that fought primarily with his fists. His fighting style is more akin to boxing, employing only punches to attack his enemies. Due to the training he's gone through for several centuries and the natural strength inherent in him as a former Dragon, his strength is absolutely terrific. He was one of the most powerful Dark Lords, making him one of the World's strongest creatures, and his fists where strong enough to one-hit KO most high-level'd adventurers.

His body is made of a rocky material, incredibly tough and sturdy and has an outstanding stamina. In the past, he was regarded as a legend during the Dark Lord War for his fearful power, capable of defeating many Toushin during the war. He rampaged so much in said war, that he soon became as the Toushin Destroyer and, considering the already amazing fighting power Toushin possess, this says a lot about him. He also has an absurd stamina, being capable of fighting for incredibly long periods of time through sheer will-power.

His most notable ability is the one that allows him to strengthen his body the more he fights. The more damage he receives, the harder his skin becomes, making him more resistant to attacks, be it physical or magical. He also probably has a high magic level because he can cast high level spells such as Great Fire Ball and can summon undead soldiers.

His final trump card is his ability to turn into an amorphous Earth Dragon, which is probably his real form. In this form, his strength and fighting style is more akin to that of the Dragon race, and boosts his overall fighting potential to even crazier levels. Once he transforms, he's like a massive moving mountain, employing his limbs to crush his enemies with little mercy. He can even cause earthquakes by stomping on the ground, releasing shockwaves of energy through the land and bringing immense destruction around him, and his strength is roughly equal to that of a Holy Beast like Orochi.

Noce was born somewhere during either Kkulf Kkulf's or Avel's era as an Earth Dragon, whether he was one of the original dragons or if he was born from Kamilla it is unknown. Ludo-Rathowm decides to replace the dragons and orders Ragnarok. An army of Gods descends to The Continent and the dragons are wiped out. Noce managed to survive and hides himself.

Millenniums later during Gele's era, she finds Noce and gives him her blood. Noce becomes a Dark Lord and pledges loyalty to Gele. At some point, he's considered powerful enough to carry the title of Elite Dark Lord. During the end of Gele's era in the year GL1004, she is sealed in another dimension by Gi using Chaos, who ended up becoming Demon King and starting the GI era. Noce steps down of the Elite Dark Lords and starts formulating a plan to release Gele. He starts training until the right time comes.

The Dark Lord War breaks out with the Holy Magic Sect in the year GI0420. Noce actively takes part in the war and competes with Dark Lord Lexington on how many Toushin Cities they could crush. However, Noce betrays her and kills her in the Toushin Toshi Upsilon and concealed the act by making it look like she died under the falling Toushin City.

During the war Noce also fought Toushin Theta for 70 days straight in a fist fight. Theta was very quick and an excellent fighter that could predict and evade every attack. She could evade all of Noce 's attacks, but her attacks on him were only hardening his body. Theta wasn't able to take away the smirk from his face for the whole battle, but in the end her real body was attacked from behind and she stopped in front of Noce. He got so angry for not being able to finish her off that for the rest of the war he rampaged so much to be know as the Toushin destroyer.

In the year GI1015 Noce comes across Dark Lord Burksham, and while he was immobilized, he stabs him to death. Noce considered anyone trying to make Little Princess the next Demon King an obstacle in his plan to bring back Gele.

Gi dies around the same time and the Monster Realm is divided into two factions. He joined the Hornet faction, simply because he thought that faction would be easier to deceive in his plan to restore Gele from her imprisonment.

He saw an opportunity and he left Hornet's side to set his plan in motion. He deceived Dark Lords Ithere and Satella to come with him and used Patton, the prince of Helman, to bring Leazas to its knees. As planned, Demon King Gele was successfully unsealed and he even managed to break Chaos, the sword that sealed her, in half. He was later taken down in a fierce battle against most Leazas' strongest commanders and Rance wielding the repaired Chaos. Noce is reduced to a mere Demonic Blood Soul and is absorbed by Gele immediately after to recover some strength, bringing an end to Noce's existence. 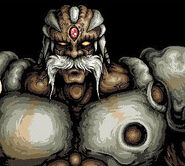 Noce in the original Rance III.

Noce's design in the 03 remake. 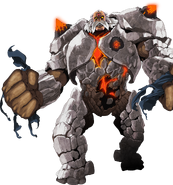 Noce's real body behind the clothes. 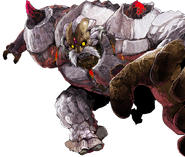 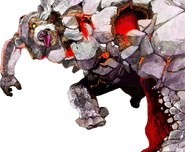 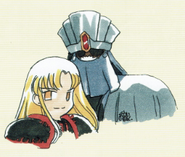 Noce and Ithere from the Alice's Cottage 4/5/6 Guide.