Noah Hakobune, whose original name was Noah Sailing, was once a fairly famous adventurer from the Keith Guild. She formed a team with Lark Pikospeak, and they were well known as an impeccable duo. One of her greatest feats with Lark, was the defeat of a powerful Monster known as Kas A before.

A charming and beautiful young lady, Noah is polite and amiable. Mostly proficient with supportive and healing magic, she provided an outstanding assistance to her partners in battle.

In LP0002, she and Lark took a quest to find the missing daughter that had been kidnapped by a Monster in the Lis Cave near the town of Ice. However, the small party had the misfortune of coming across Dark Lord Satella, who was searching for the hero that had received the Holy Items from the Princess of Leazas very recently. Thinking it was Lark, she had her golem Isis brutally rape Noah to force him to reveal the location of the items. Actually being oblivious to it Lark admitted his lack of knowledge on the matter, but a distrustful Satella only ordered to intensify the sexual abuse until Noah passed out just before Rance arrived.

After this incident the duo split up and Noah quit the life as an adventurer. During the events of Rance Quest, 4 years later, she appears as a recruitable healer character and it is revealed that she got married and changed her name to Noah Hakobune.

She is a kind and compassionate girl. Behind this guise lies a woman who is surprisingly into rough sex. When she met Satella again in Rance X, she hoped Isis would rape her again and was disappointed to learn he was dead.

As part of a formerly famous duo Noah was a powerful healer with a good cap of 33 and a Lv1 Divine magic skill. Though while her skills paled in comparison to people with higher caps (Like Sill Plain) and Lv2 and 3 users she is a good healer all the same. She also possesses a studying skill making her a quick learner. 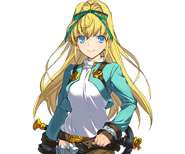 Noah in rehabilitation in the original Rance III. 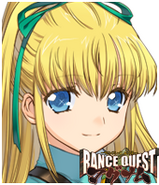