Niwa Nagahide is a vassal of Oda House.

A loyal servant of the Oda Family, Nagahide remained a firm supporter of its lord Oda Nobunaga even after he had caused it to lose the vast majority of its territory due to his poor health.

During the events of Sengoku Rance, Nagahide was one of the few Oda commanders to remain loyal to the country after Oda Nobunaga appointed the foreigner Rance as the secret head of the family. Despite this, he is not seen participating in defeating the rebelling commanders, and has no role in the game beyond assisting in combat.

Nagahide does not have a unique appearance, instead using a generic "old man" portrait, making him appear to be a curmudgeonly-looking old man with short greying hair in a brown kimono. Despite his appearance, he is actually fairly young, and was only 34 years old during the events of Sengoku Rance.

As Nagahide does not appear in any cutscenes, very little is known about his personality. Somewhat notably, however, he will always murmur "...Go to Hell..." if dismissed as a commander, suggesting that he is a fairly grumpy man. This also suggests that he is quite brave, as Rance, the man that he tells this to, is generally feared by the average person due to his incredible strength and cruel personality. Beyond this, Nagahide is suggested to be very loyal, as he chose to stand by his lord's side even as his nation lost nearly all of its power and influence.

Nagahide is an experienced warrior of decent ability. He possesses a Level Cap of 24, which he is quite close to reaching, giving him a fair amount of individual strength. While he is greatly outclassed by countless more talented people, his well-rounded attributes allow him to provide steadfast support to Oda House, particularly when it is low on resources and manpower.

Nagahide is proficient in both archery and swordplay, giving him decent application in both close range and long distance combat. Additionally, he is a competent field commander who specializes in leading offensive assaults, making his personal unit noticeably stronger than the average group of archers.

Perhaps the most notable ability that Nagahide possesses is the "defeated warrior hunt" skill. Through this skill, Nagahide is much more likely to capture the commanders of enemy armies that he defeats than most other fighters are. As a result, Nagahide is able to quickly bring new talent into the Oda Army's ranks, which was vital for the nation's survival when it was at its weakest. 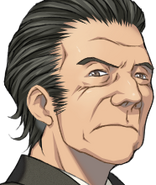