Harry Stuart (ハリー・スチュワート, harī suchuwāto), better known by his stage name Ninja Master, is a member of the Leazas City Garrison who moonlights as a fighter in the Leazas Coliseum during his free time.

Ordinarily a plain and unassuming man, Harry utilizes an item known as a personality reversing scroll, which transforms its user's personality into the exact opposite of what it normally is for 30 minutes, while competing in the coliseum to make his fights more interesting for spectators. When under the effects of the scroll, Harry transforms into a flashy and flamboyant warrior styled after the Ninja of the eastern nation of JAPAN, giving him a unique and extravagant stage persona that makes him a favorite among coliseum goers.

During the events of Rance 01, the Adventurer Rance arrived at the Leazas Coliseum while investigating the disappearance of Hikari Mi Blanc. After seeing Ninja Master's name among the coliseum's rankings, Rance became convinced that he was none other than Kentou Kanami, who had earlier attempted to assassinate him to prevent him from further investigating Hikari's disappearance. In the hope of obtaining more information about Hikari's location from Kanami, Rance participated in the coliseum to face off against Ninja Master, who was ranked 4th among its competitors.

Upon finally getting the opportunity to face Ninja Master, Rance was shocked and angered to discover that he was not only not the ninja that he was seeking, but also a man rather than a cute girl as he had expected. His anger at the misunderstanding greatly increased his strength, allowing him to defeat Harry and win the match with ease. Rance's impressive performance during the fight was observed by Maris Amaryllis, the attendant of Leazas' princess Lia Parapara Leazas, who approached him afterward to recruit his help in exterminating a group of Ghosts that had been haunting a villa in a certain corner of the town.

After his defeat, Harry once again encountered Rance at the coliseum's entrance. Despite Ninja Master having proven to be a false lead, Rance intended to continue competing in the coliseum to defeat its champion Yulang Mirage and win her approval as a man. While Harry congratulated Rance for his victory in their match, Rance did not recognize him at all outside of his Ninja Master persona, prompting Harry to explain the nature of the personality changing scroll to him. Intrigued by the scroll, Rance commanded Harry to give it to him, to which the other man agreed without issue, stating that he had many more that he could use. Rance later used this scroll on his slave Sill Plain to temporarily transform her into a much more seductive, confident and domineering partner.

During the events of Rance 03, Harry, along with the rest of the Leazas City Garrison, was instructed to evacuate the citizens of Leazas Castle Town to the city of South to protect them from the invading Helman Army. Upon reaching South, Harry was briefly reunited with Rance, who had been leading the Leazas Liberation Army in opposition to Helman. Harry attempted to engage Rance in conversation, but was not recognized and quickly kicked away.

While acting as a member of the Leazas City Garrison, Harry has a largely uninteresting appearance, being a square-jawed man wearing the standard uniform of a soldier of the City Garrison. When acting as Ninja Master, Harry adopts a much more unique appearance, wearing a long-haired purple-colored wig, matching purple samurai armor, kumadori face makeup, yellow eye contacts, camouflage-print underclothes, a spiked black headband and a tall pair of geta.

An entirely unremarkable man completing lacking in any presence, Harry rarely ever manages to leave an impact on anyone he meets. He is aware of this, and takes on a self-deprecating approach when discussing himself, referring to himself as "boring" and "timid" and recognizing that very few people would have any interest in watching him compete in the coliseum unless he possessed an entirely different personality. Despite this, he is also a friendly and good-natured person who enjoys entertaining others and does not think of his role within the coliseum as anything more than a performance.

When under the effects of the personality reversing scroll, Harry becomes Ninja Master, an exceedingly flamboyant and theatrical warrior inspired heavily by JAPANese kabuki theater. Ninja Master relies heavily on spectacle to entertain audiences while fighting in the coliseum, such as by launching an elaborate fireworks display and reciting a convoluted haiku before every match. Harry becomes far more confident in himself when acting as Ninja Master, allowing him to boldly challenge opponents in the coliseum in a way that he otherwise never could. In spite of this, Harry considers Ninja Master to be a character entirely different from himself, and only transforms into him for the sake of entertaining coliseum patrons.

Harry is shown to be on good terms with his fellow garrison member Menad Shisei in Rance 01: Hikari wo Motemote The Animation, with the two casually joking around with each other while on duty during the series’ ending sequence. However, as the two are never shown interacting within the games themselves, it is unclear if they share this relationship in canon.

Harry is an ordinary man of generally unremarkable ability. While he has a slightly above-average Level Cap of 18, bestowing him with a limited amount of combat potential, he is stated to be rather clumsy and claims to spend most of his time while on duty filing paperwork rather than patrolling, implying that he is not particularly noteworthy as a combatant.

When transformed into Ninja Master, Harry becomes a much more competent and confident fighter, allowing him to reach 4th place in the Leazas Coliseum rankings. Ninja Master’s fighting style appears to rely primarily on strong kicks, with his weapon of choice being a pair of extremely high-based geta. Contrary to his name, Ninja Master is not suggested to possess any of the skills of an actual ninja, and rather simply uses the title to intrigue audiences. While a more effective fighter, Harry is still not made out to be particularly strong when acting as Ninja Master, and was defeated quite easily by Rance when the two fought in the coliseum.

Outside of combat, Harry possesses the Cooking Lv1 Skill Level, making him an exceptional chef. He specializes in preparing JAPANese cuisine, and often infuses his dishes with Leazas-sourced ingredients to better fit local palates. 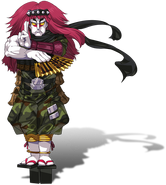 Ninja Master's appearance in Rance 01: Hikari wo Motomete The Animation.

Harry's appearance in Rance 01: Hikari wo Motomete The Animation.