Nero Chapet VII is the General of the 4th Army of the Helman Army, having roughly 50,000 individuals under his command.

He was born in a distinguished family (very rare in Helman) and graduated in the military school as an elite. These things, along with the fact that he is one of the highest positions in the most powerful military country would indicate that he's an amazing soldier but this is actually not the case. Nero is infact pretty average in most areas, and is not the best general. His strategy and leading is very basic, charging and killing the opponent. He's not terrible but his skill doesn't match the size of his ego, and when he fails he tends to blame his second in command, Cream Ganoblade, who he vastly undervalues due to being a woman and having little fighting ability.

He made his first canonical appearance in Rance IX as the General of the 4th Army and one of the first threats of the Revolutionary Army. After suffering constant defeats at the hands of the revolutionaries he attempts to burn down the town he is in to kill the revolutionaries. However, he ended up being killed by a mercenary hired from JAPAN, Tokugawa Sen, to fight for the Army.

Nero is a somewhat good looking and pretty elegant man, boasting a short blonde hair with a pure expression.

He is usually calm, elegant, graceful and flamboyant but loses his cool pretty easily in situations that are unexpected, showing no signs of his previous superficial elegancy.

Nero is also noted for being very arrogant, and not being nearly as skilled as he boasts. He's very sexist as well, deeming women as inferior and blaming his subordinate Cream Ganoblade for his mistakes, even though she's a better leader and tactician. He completely looks down on all her efforts or strategies, claiming that they are worthless. He's a very unlikable man and a prime example of Helman's decay.

As the General, Nero holds the position and military power to command the whole 4th Army, composed of 50,000 people and spread over the cities of Volgo Z, Sudori 13 and Cossack, which gives him an incredible military power.

He himself, is not quite as impressive. He has Lv1 Sword Combat and Bow Combat skills, focusing mostly in battling with a crossbow. His level cap is the lowest of the generals, reaching only 22, and his current level is 20 so he's close to his full potential. He also lacks good leading or tactical skills, and is a very simple-minded man. 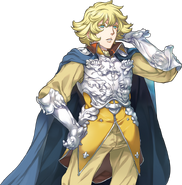 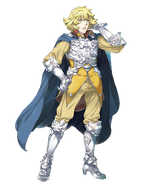