AliceSoftWiki
Register
Don't have an account?
Sign In
Advertisement
in: Articles with Minor Spoilers, Articles needing a Quote, Characters,
and 9 more

When Reichardt was killed, Necai abandoned the life of a thief and became an adventurer by taking jobs of the Keith Guild. She reappears in Rance 03, fighting off an army of zombies in a town and can be recruited into the party by helping her complete her quest.

She was born in the Free Cities Alliance in the town Ice in the year GI0997.

She is last seen being rated on her performance that month. She considers retiring from adventuring.

Necai is a pretty relaxed and laid-back woman. Life is simple for her, she simply wishes to make a living and enjoy life without many worries. She was a thief but quickly quit being one after her boss was killed. She didn't show particularly interested in fighting for him either, proving her loose demeanor.

She's level-headed and can be a pretty good and rational leader if she's motivated, this is the reason why she was the Second in Command in her gang of thieves.

She's very fond of alcohol and is very experienced with men, being perfectly willing to casually have oral intercourse or give handjobs to complete strangers in exchange of a bottle. Surprisingly despite this, she was still a virgin until the events of Rance 03.

Necai isn't a very motivated and passional woman, so she only fights if she really has to. She has a Short Sword Combat Lv1 skill and a level cap of 24, with her current level being 20 so she's not far from her cap.

Her weapons of choice are two big chakrams she wields in both hands. They are used as a melee weapon, rather than thrown and while dangerous, they are pretty awkward weapons.

Necai is not quite so powerful but her strength is sufficient for the jobs she ventures and the laid-back life she lives.

For more in-depth gameplay information of each game refer to: 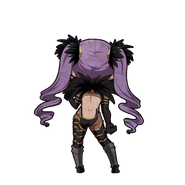 Necai in dungeons in Rance 03. 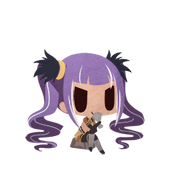 Necai in the Rance 01 OVA

Necai and Rance in the Rance 01 OVA.