Nay Oolong was an adventurer from the town of Kathtom of the Free Cities Alliance. She is one of Bird Lithfie's many ex-girlfriends, but she's one of the few that left him without Rance's influence.

She was part of a group of adventurers that tried to take down the Four Witches of Kathtom, but she, along with her companions, were defeated by Maria's magic statues. She got separated from her group and remained wounded near the entrance waiting to recover before Rance stumbled upon her. Depending on player's choice, Rance will either take advantage of her weakened state and rape her or help her by making Sill cast a healing spell on her. If helped, she will reward Rance with money.

She later quits being an adventurer, deciding she wasn't cut out for an adventurer's life after nearly being killed by it, and instead lives a more peaceful life in Kathtom. 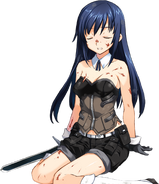