Natori is the leader of Miko Institute in Yamatai, an organization of shrines that consists of Fukuman with free access to anyone. The Fukuman perform a ritual of purification and healing that reduces the corruption of a person's heart and brings happiness. This ritual is simply performed through standard sexual intercourse with those with the ability of a Fukuman so, naturally, the service attracts many males that are just more interested in a free session of sex rather than the purification.

In reality, this institute was founded with the objective of appeasing the rage of the Holy Beast, Orochi. Fukuman's ritual purify other's soul by absorbing the pollution onto themselves, corrupting their own soul in the process. In order to avoid the country from being destroyed by the God, these polluted Mikos are given as sacrifices to him. As its leader, Natori is very dedicated to carry out the main objective of the Miko Institute. While she seems to dislike the idea of sacrificing mikos, she also realizes that the ritual is needed to prevent more casualties, in which she cannot object.

Despite being the organization's leader, Natori is the only one that doesn't service men and is mostly in charge of training other girls for the task and managing the administrative affairs of it. In reality, Natori is a very special case between Fukuman. Through sexual intercourse, Fukuman absorb the pollution of their partner into themselves, but Natori absorbs their entire life force itself, killing her companion in the process. There is a well-known rumor of a "Miko of Death", someone with the ability of killing those she fornicates with, but no one know this person is actually Natori. She is terrified of this ability, and despises herself for it. It is implied that she first found out about this upon losing her virginity with the man she loved.

Natori is a very mature-looking and adult woman. She has a beautiful and well-developed body and a peaceful and pure expression. She has very light blue hair and pale skin, giving her a somewhat divine and elegant appearance. She wears an alternative outfit of the Miko's clothing, lacking the red parts and with a golden belt.

Despite her status as the Miko of Death, Natori holds an amazing amount of respect for human life. She dislikes war and bloodshed greatly, and the sacrifices to Orochi she carries through upsets her quite a bit. She despises her power as a Fukuman, and hates the idea of using it, even against her enemies. When she was cornered and forced to use it in an attempt to kill Rance and save the Miko Institute during the events of Sengoku Rance, she was still overwhelmed with an incredible grief and couldn't avoid crying during the experience at the thought of having taken Rance's life, despite him being her enemy.

She is a very serious woman that shows little emotion all the time, but she's a well-intended person that carries her duty as the leader of the Institute in order to prevent a bigger cataclysm from Orochi. She is sensible and rational, being a very intelligent and adept manager of the group. She's universally respected and admired by all the mikos, and many Warlords hold a great amount of respect for her. She's also a very peaceful individual that dislikes conflicts and prefers to set things peacefully. Even Dark Lord Xavier, noted for his hate towards the JAPANese, didn't attempt to kill her when he attacks her House, simply claiming the territory instead.

Natori is a Miko with a unique Fukuman Lv3 skill, being a legendary and historical user. Thanks to this, she was born with the power of taking the life of those she has sex with. It is later revealed during the events of Sengoku Rance that it is possible to avoid dying from a session with her by having a completely uncorrupted soul. Rance was able to survive due to the fact that he legitimately and honestly doesn't consider or understand his acts as evil, and actually has a pure soul as a result, although he was still incredibly exhausted and instantly fainted at the end of the sexual intercourse.

In actual battle, Natori is an incredibly useful ally. While she is fairly fragile and not particularly strong physically, her skills as a Miko grant her amazing combat potential. She is a very proficient healer that can easily restore multiple people's energy at once, and possesses a very devastating attack known as Miko Storm 2 that covers a very large range and deals massive amounts of damage to her enemies. She is also very skilled with a Bow and has an outstanding cap of 58, one of the highest in JAPAN.

After hearing a rumor about Miko Institute's activities from 3G, Rance decides that he should pay a visit to earn a free service he always wanted. Though it doesn't seem to go very smoothly when he draws the lottery, in which he always loses, much to his anger. It provokes him to the extent that he said he will attack Yamatai. In response to Rance's threat, Natori appears. Having introduced her status as the representative of Miko institute, she asks Rance to leave, in which Rance strongly objects. In order to satisfy him, Natori gives in, she allows Rance to have the same service given to those who won, though she won't be the one who provides said service to him.

Natori claimed that she doesn't give the service anymore due to being old, which in actuality is a lie to cover her real identity as the Miko of Death, one who is able to kill anybody by simply having a sexual intercourse. Remaining oblivious to the fact, Rance declares war against Miko Institute, so he can H Natori.

Natori will be automatically captured After Oda conquers Miko Institute. She will join under one condition, Rance must allow her to return to Miko Institute from time to time, so that she can help and teach the new representative of Miko Institute, implying that Orochi is still her main concern.

When Rance introduces her to Tamagushi Fuuka, Natori is shocked, as she seems to know her, but she remains silent as she is not really sure with it. Later in the story, Rance asks Natori to open the seal through Orochi's dungeon, confident that he will finish Orochi once and for all. It's soon revealed on the last floor that Fuuka was related to Miko Institute as she was one of the sacrificed mikos in the past, proving Natori's initial thought as right. While she doesn't like Rance, she's indebted to him and deeply expresses her gratitude for defeating Orochi and preventing more ritual from being performed.

In the epilogue, Natori made a brief appearance, she is the first to recognize Isoroku's pregnancy. 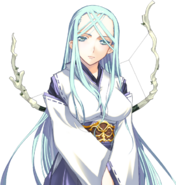