Naoe Ai was the previous tactician of the Uesugi House, as well as the main administrator of its political affairs. The Uesugi was among the most powerful Houses during the 4th Warring States Period of JAPAN, governing the territories of Sado and MAZO. She held an extremely important position for the Uesugi, managing most of the political and economical affairs of the territories the powerful House controlled at the time, as well as being the personal advisor of the Head of the clan Uesugi Kenshin.

She makes appearance during the events of Sengoku Rance as one of Uesugi Kenshin's most loyal and supportive retainers. In the first battle event of Uesugi against Takeda, Ai is shown as the tactician of their army. With her perception, she is able to escort Kenshin into safety before all of the key commanders of Takeda return to aid Shingen, as well as assisting her in withdrawing when surrounded by Shingen's commanders. During their multiple battles against the Takeda, Ai plays a major role by commanding Kenshin's Army and providing her with advice. When war breaks out between the Uesugi and the Oda House, the house that at the time was under the leadership of a barbaric and selfish foreigner Rance and was quickly expanding throughout JAPAN. After the first battle between Kenshin and Rance took place, Ai was the first one to notice her crush for him after a brief conversation with her. While she is actually against it, she feels it's quite common and perfectly normal for girls around Kenshin's age to fall in love, though she still cannot understand why it has to be Oda's foreigner. To make Kenshin forgets about Rance, Ai arranged some marriage meetings for Kenshin, but it doesn't end well due to Kenshin's obliviousness.

During the War with the Oda, Ai and Kenshin are eventually removed from power due to the scheme pulled off by Kenshin's uncle, Uesugi Kensei, who performed a coup and took hostages most of Kenshin's trusted commanders, forcing her to surrender and imprisoning them both. While war is still on-going with the Oda Ai, along with Kenshin, are incapable of acting as commanders anymore due to being Kensei prisoners. During this time, Ai willingly volunteers her body to be used by Kensei's sex-hungry underlings in order to protect Kenshin. Eventually, the Uesugi are toppled by Rance's forces and his army attacks at Uesugi Castle directly, thus freeing Kenshin and Ai from their imprisonment. Following the fall of their house, Ai is recruited as an Oda commander after Rance gets Kenshin to join the Oda House.

In the Sengoku Rance Epilogue, Ai was briefly mentioned by 3G, reporting that she found one of three divine items, the Emperor Sword, at the mountains of Sadokinzan. She doesn't make a physical appearance in Rance Quest but she's mentioned as having stayed in JAPAN to take care of several administrative affairs while Kenshin left the country to follow Rance.

A fairly attractive young woman with a short blue hair, light skin and sharp eyes. She has a noticeably big forehead that is left exposed by her hair-style. Her body figure is very slim and not particularly voluptuous. In terms of attire she usually sports a traditional JAPANese bushi armor coupled with shorts and a long red belt. She's often seen carrying a sword but in the battlefield she replaces it for a war fan to command her troops.

In terms of personality Ai is an overall polite and serious person with a business-like demeanor. She's very hard-working and diligent, working tirelessly on her duties without complaining or protesting the slightest. She is very perceptive, considerate, and level-headed, making her a very reliable person that those around her come to quickly depend on. She's quite blunt and easily-irritative, and doesn't like vulgar people that don't behave themselves. She's a cynical as well, often distrusting others intention until proven otherwise, and is very cautious with strangers as a result. She held an aversion towards Kenshin's uncle, Kensei, as she thought of him as a despicable and a deplorable man with his own hidden agenda, and regularly warned Kenshin about him, who mostly remained oblivious to his cunning. She doesn't often spend time with other people if it's not necessary, as she spends most of her time working on her responsibilities, but she has a soft spot for immature and naive people, who awake feelings of motherhood in her.

At some point in the past she fell in love with a man with who she shared her first time with, but whether her lover died or if they distanced from each other remains unknown. In second playthroughs and if Shimazu Kazuhisa is recruited, he will begin to pursue her, where they prove to have quite a lot of chemistry with each other. If her affection is not at love by that point, she'll quit being a general and combine her unit with Kazuhisa's, but if it is she'll reject him in favor of Rance. This event is completely non-canon though.

As the personal advisor of Kenshin she's very close to the Goddess of War. On the outside, she seems like she treats Kenshin with the same respect and allegiance as any subordinate would treat his lord, but the relation between them is more like a mother and daughter, with Ai being the former. While she is aware of the fact that Kenshin is someone whom people throughout JAPAN respect for her prowess in combat, Ai sees Kenshin more as a naive child who needs protection and care, and accurately treats her as such. She's the one responsible for routinely managing most of Kenshin's schedule and duties as a ruler, as well as regularly providing her with advice and support in a wide variety of matters. Ai loves Kenshin with all her heart and would do anything to ensure her safety and happiness, to the point she's more loyal to Kenshin herself than she is to the Uesugi House. Surprisingly, despite the fact that she represents an important mother figure for Kenshin, she is actually a year younger than her, being only 18 years old by LP0006. Because of her mature behavior and her adult appearance she's often mistaken for being older than she actually is. Additionally, Kenshin holds an immense amount of respect for Ai and deeply values her opinions and words.

Kenshin's crush for Rance concerned her a lot, as she disliked his brutish and womanizing nature. She believed that there were many men far more fitting for Kenshin and was incapable of comprehending why she liked him at all, expressing both disapproval and disappointment for her decision. Upon joining the Oda and formally meeting him, she talked to him about her relationship with Kenshin and how she slept with Kensei's men to protect Kenshin. After knowing him personally she became even more confused over Kenshin's feelings for him. At some point when Kenshin falls ill to a strong fever, Rance convinces Ai to have sex with him or else he would do Kenshin instead. However, upon realizing that he's doing the same as Kensei, he stops mid-way through and apologizes. This strikes Ai and makes her realize about Rance's nature, stating that she can't tell if he's cruel or nice, but he's just whimsical, and agrees to continue with the sex. After that she continuously finds herself sleeping with Rance from time to time for reasons she doesn't fully understand herself, but admitting that she's come to accept him. It is likely that discovering that his behavior is not cruel but childish and immature has awaken feelings on Ai for Rance similar to those she has for Kenshin.

A very competent and skilled individual, Ai is widely recognized as one of JAPAN's most notable tacticians. While her skill is not quite on the same Level as genius veterans like Sanada Tourin, her incredible talent and gifted mind allow her to still be able to keep up with real experts of the Art of War. Sporting a Strategy Lv1 skill, Ai is capable of formulating complex and unconventional strategies during large-scale battles. With her contributions, the Uesugi House has been able to get through all sorts of demanding and critical situations. While her role and actions are usually overshadowed by the unbelievable performance of her superior Uesugi Kenshin, her tactical and commanding abilities are one of the main reasons why the Uesugi were able to engage in frequent stalemates with the Takeda House, as she was always capable of fixing up Kenshin's mistakes or saving her from itchy situations.

Additionally, she managed most of the administrative affairs of the territories governed by the Uesugi with efficiency, while also taking care of Kenshin's personal necessities like her diet and schedule. Ai's hobby is cooking, and she is very good at it even though she doesn't have a Skill Level for it. It appears that she developed that hobby of hers in order to satisfy Kenshin's abnormal appetite.

In terms of battle ability she is not described as a particularly competent fighter as it is not her main role, but with her current Level being 37 it seems like she could pose a decent threat to a warrior. She's often seen carrying a sword, suggesting that she's well-trained in swordplay, but she's never been seen wielding it. She has a Bow Combat Lv1 skill, which could potentially turn her into a potentially powerful archer as well but it is unknown if she's ever trained with a bow before, making her talent for it go undiscovered. 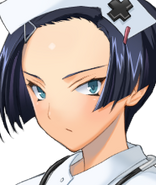 Ai as a Nurse 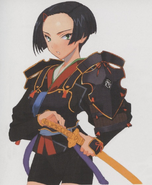 Ai's first design in the Manual.

A sketch of Ai presented in the Rance IX Manual.