AliceSoftWiki
Register
Don't have an account?
Sign In
Advertisement
in: Articles with Minor Spoilers, Articles needing a Quote, Characters,
and 7 more

Nanjou Ran is the leader of the Nanjo House of JAPAN, a family vassal of the Houjou House. She was born in the year GI1001, being 19 years old in her appearance in the Rance Series.

Several years ago during the competition to determine who shall be the common leader of all the Diviner/Yin Yang houses, she lost by a wide margin to Houjou Souun, losing her House's right to be head of the association. Even though she hated losing and held a grudge towards Souun for it, over time the two ended up falling in love with each other and they were a solid couple, but lately, Souun's obligations as the head of the House have distanced them a bit since they can't spend much time together. While she and Souun still love with each other, these conflicts have led their relationship to not go very well.

Unknown to her, one of Xavier's apostles, Suzaku, is sealed inside of her bloodline, meaning that the revival of Xavier and his Apostles would end in her death when Suzaku comes out of her body.

Ran is a young girl boasting a short purple hair and an unconventional attire different to the regular diviner of the Houjou House, wearing a skirt with high thigh socks and a shirt that resembles the upper part of a white kimono with purple borders. She also wears two accessories on her hair that look like fluffy balls.

Personality-wise, she's strong-spirited and determined, but also a pretty uptight and with little tolerance or patience towards others. She's pretty easily irritable and comes off as somewhat grumpy, especially towards those she doesn't like, with who has even less patience with. She certainly has a short temper, and is one to change her mind quickly from the heat of the situation, very different from the composed and stable Souun. She also has a somewhat funny personality quirk, being an extremely heavy sleeper that usually sleeps surrounded by alarm clocks, and even then they more often than not fail at waking her up. Rance finds this aspect of her cute due to her constant failed attempts at getting over it.

Despite her short-tempered nature, she still has a warm and caring side, and also proves to be an incredibly loyal and devoted person. Despite her complains and dislikes over certain scenarios, her love for Souun is truly authentic and she can't stand the idea of him dying, being willing to do anything to prove useful for him.

Ran is also a pretty demanding person though, she doesn't like to be treated in a way she doesn't find fair.

Despite this, she's still very strict and harsh with herself, and actually lacks self-confidence due to her skills as a Diviner being easily overshadowed by Souun in the battlefield. She's constantly training in order to improve her talents and not be a nuisance for others but she's never content with her own performance, even when others fill her with praise. The only time she was shown proud of her skills was upon learning to Summon Suzaku, granting her a power greater than Souun's that could easily defeat any of the Houjou House's opponents.

Ran's a powerful mage skilled with the unique Yin Yang Arts from JAPAN, boasting a Yin Yang Lv1 skill and a Level Cap of 38, with 32 being her current level. She's an above average diviner, capable of serving as one of the top commander for the Houjou House, the clan formed by the most skilled diviners in JAPAN, and leading a unit in battle against other powerful houses such as the Takeda House.

Like most Diviners, she has control over Shikigami and can use them in battle to assault her opponents with a huge storm that wounds all her enemies in the battlefield, sometimes also using them to move around by floating. She can also cast a Guard Shikigami but only an average version that doesn't cover all her allies. She's also capable of summoning Oni to assist her in battle or in whatever business she requires, and her summoned Onis are loyal and servile to her, proving her proficiency at the summoning.

Her biggest talent is her ability of closing Hell Holes, a very difficult task that usually can only be employed by extremely skilled Diviners, like those that carry a Yin Yang Lv2 skill. This didn't come naturally to her though and could only learn to do it in a desperate scenario after a lot of training of her part.

She also has the unique ability of Summoning the Apostle residing in her body, being the only vessel of an Apostle that could make use of it. The summoning invokes Suzaku in his true form as a flaming bird and follows her command. It is extremely powerful and capable of vaporizing entire armies in a second. However, it carries a huge handicap. The more she uses this ability, the closer she gets to the time in which Suzaku will come out of her body and kill her, so it's extremely dangerous for her to make use of this power.

Appearances in the Series[]

She joins the Oda house to find Souun, who went missing in Mamushi Oil Dungeon. During a battle with the ogre, Ran summoned Suzaku for the last time to save Souun, despite his words telling her to stop. She died the moment her hand reaches Souun's and Suzaku is released.

At some point Rance and Ran will enter in a dungeon looking for the missing Souun, who had gone missing while fighting a powerful Oni. Canonically, she dies after summoning Suzaku to defeat the Oni  before he kills Souun, but Ran's killed in the process. However, if the player enters in Ran's Route, Rance will stop her to prevent her from killing herself and the Oni fatally wounds Souun, but his life is still saved by Rance, who defeats the weakened Oni on his own. After this, in order to save Ran's life from the Apostle she bears within her, Rance prematurely fights Xavier and he's sealed by Seigan using the seal created by Geppei. Due to this, Suzaku remains sealed and Ran's life is saved, however, Souun is fatally wounded from the previous battle and is taken in by the Oda House to treat him. The main villain in this route is Keikoku, who attempts to manipulate the weakened Souun to open a lot of Hell Holes in JAPAN and unleashing an incredibly powerful Oni called Sekimei, being Ran the only capable to stop her upon realizing her ability to seal Hell Holes, inherent only in the most powerful diviners. 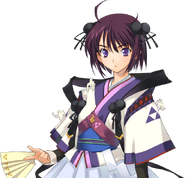