Mysteria Tou is a great and powerful elder witch with an incredible experience and knowledge of the Magic Arts. Her greatest interest and goal is to raise and train powerful mages as her students.

Some years ago she founded the Mysteria Magic Academy, where she gathered 10 young individuals that showed aptitude and talent for magic. Among these 10, the ones confirmed are Souzou Masou, Athmaze, Chenezale do Ragarl and Ragishss Cryhausen. She mostly teaches about ancient dark and forbidden magics. However, she ended up closing the academy after a conflict that dispersed three of his best students, which left her unsatisfied with the small fry she could raise from the academy.

She then picked a superior female mage to be her son's wife in order to have a suitable heir. The plan proves successful when Mysteria gets as a granddaughter someone with a Legendary potential as a mage, who's given the name Miracle Tou. She devotes herself into turning her into the greatest mage. Mysteria was a great inspiration and represented a major impact in the way Miracle's personality turned out, and was also the one that implanted in her the idea of World Domination.

Mysteria is ingested by Galtia along with Lucy, after he invades Zeth. With help from Miracle, she is able to escape with the others.

Despite having a Lv2 magic skill, her vast knowledge, experience and power is comparable to that of an inexperienced Lv3 mage, which is an absurdly impressive feat. She carries knowledge over many secret and forbidden arts. She was the one that taught Ragishss about the Phil Rings, or Shizuka about the magic spell to travel to the past and change history.

She also possesses a cap of at least 66.

Mysteria with her grandaughter Miracle Tou.

A sketch of Mysteria for Rance IX. 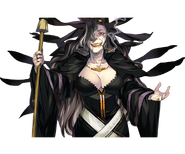