Murara was a high-ranking member of the Endless Tomorrow Battle Group, a prominent Leazas-based bandit group, and a minor antagonist in Rance 01.

Originally from the eastern nation of JAPAN, Murara was scouted by Reichardt, the bandits' leader, due to his considerable strength. Unfit for sneaking and stealing, Murara was instead assigned the duty of serving as Reichardt's personal bodyguard, fighting off enemies aiming for his employer's life.

During the events of Rance 01, Murara was charged with guarding the entrance hall of the group's hideout along the outskirts of Leazas Castle Town while Reichardt had his way with Pulptenks Flanders, the young daughter of bar owner Bobza Flanders that the group had recently kidnapped. Murara was encountered by the warrior Rance, who had infiltrated the bandits' base in order to rescue Pulptenks, while he was enjoying a large spread of various Foods. With the large bandit refusing to allow him past, Rance was forced to eliminate Murara to complete his mission.

Rance has the options of either fighting against Murara, killing him in the process, or bribing him with 100 GOLD to leave his post and buy dessert for himself. As Murara is listed as being deceased in his Rance World Notes profile, it can be assumed that Rance canonically fought and killed him.

Murara's role was largely the same in the original release of Rance I, though he demanded that Rance give him a bribe of 200 GOLD in order to avoid fighting him rather than Rance offering him GOLD by his own volition.

Murara was a hulking dark-skinned man with an enormous and exaggeratedly-muscular body, long white hair that was pulled back behind his head and a small black mustache. Murara was also missing his left eye, and covered the empty socket with a small belt that he wrapped around his his head. Murara's clothing consisted of a pair of iron plates wrapped around his pectoral muscles by a pair of belts, a spiked shoulder guard on his right shoulder, a large circular neck guard, a gold-lined leather skirt worn over black tights and a single black sleeve along his left arm.

In the original Rance I, Murara's design was slightly different, sporting paler skin, a large white beard and much less distinct armor. This design was not unique to him, and was used by all lesser members of the thieves' group.

A gluttonous man, Murara ate constantly and was rarely seen without large quantities of food close by. He was shown to be quite crass and have very poor table manners, and frequently created large messes of partially-finished food around himself while dining. Murara would continue to gorge himself even while on duty, choosing to simply yell at Rance with his mouth still full of food when the adventurer attempted to enter Reichardt's quarters, prompting Rance to describe him as "gross". Murara's love of food was also his greatest weakness, as Rance was able to convince him to abandon his post by enticing him with the promise of dessert.

Murara seemed to possess a moderate amount of loyalty towards his leader Reichardt, referring to him as "boss" and taking pride in his position as his personal bodyguard. Despite this, however, Murara's loyalty was not at all comparable to his appetite, as he abandoned his duties guarding Reichardt without a second thought when sidetracked by the offer of obtaining more food for himself.

In the original Rance I, Murara lacked his voracious appetite and was instead portrayed as simply being a rowdy and dangerous thief. He was also shown to be much less loyal to Reichardt, and openly offered to allow Rance to get past him in exchange for money.

As Reichardt's personal bodyguard, Murara was considered to be one of the strongest members of the Endless Tomorrow Battle Group, and was recruited exclusively for his combat abilities. He possessed a relatively average Level Cap of 15 which he had reached by the end of his life, granting him a moderate amount of fighting potential. Despite his unimpressive level cap, Murara's large and powerful body bolstered both his offensive and defensive strength considerably, making him substantially stronger than others of a similar level.

Along with his great strength, Murara possessed both the Sword Combat Lv1 and Hammer Combat Lv1 Skill Levels, granting him a significant amount of potential as a warrior. In combat, Murara utilized a large two-handed battle axe with a great amount of proficiency, which, when combined with his sizable attack power, made him a formidable opponent. Upon his defeat, Murara was described by Rance as having been an annoying opponent, suggesting that he provided the warrior with a somewhat difficult fight.

Outside of his fighting ability, Murara contributed very little to his bandit group. Due to his large and clumsy physique, he was entirely unfit for stealth operations, causing him to only participate in the group's activities when combat was required. 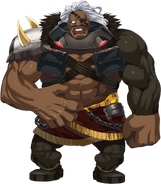 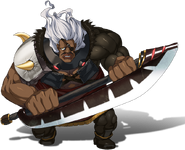 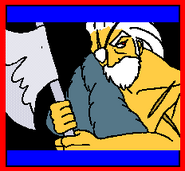 Murara's battle portrait in Rance I.

Concept artwork of Murara from the Rance 01 manual.
Add a photo to this gallery
Retrieved from "https://alicesoft.fandom.com/wiki/Murara?oldid=93632"
Community content is available under CC-BY-SA unless otherwise noted.