Teru is one of Mouri Motonari's daughters and maids. Teru's first appearance is during the first Mouri House's introduction event in Sengoku Rance, in which she clearly shows her violent side along with her sisters.

Growing bored of JAPAN as the constant war drew to a close, she traveled to the continent to see the sights, and seek out powerful enemies to fight, and she runs into Rance along the way. In Rance Quest, she is impregnated by Rance because Motonari remarked that he wanted a grandson. She later gives birth after the events of Rance X: Part 1.

Despite her looks she is the eldest sister, being 25 years old by LP0006 but she is also the most petite.

Teru is the most violent of her sisters, a trait she inherited from her father, yet she is also the most level-headed among her sisters. Aside from her primary role in the family as cleaning-maid, she is also Motonari's closest advisor, whether it's about his personal health, or war and she is very overprotective of him. While Teru does consider Motonari's actions as reckless, she still believes in her father's own power, which is why she accepted Motonari's idea to offer a duel against Oda's main force. Like her father she loves battling and war, to the point she left JAPAN to fight powerful enemies in the main continent, and she also excitingly chased after Dark Lord Kite when he appeared in Zeth in order to fight him.

Her hobby is cleaning, and she tends to be perfectionist at that. That hobby of hers ironically contradicts her second hobby, which is killing. She learned her cleaning skill from her mother, and likely learned her killing skill from her father. She loves to clean, but she loves battle just a bit more. Teru is responsible for taking care of the hygiene of Mouri's residence, and she is a perfectionist when doing so.

During one of her events, she said that she wouldn't have been motivated to learn cleaning if it wasn't for her mother, who wanted her daughters to be womanly. Knowing how her husband is well enough, she taught all of her daughters one ladylike thing to be good at, with Teru learning cleaning, Kiku learning cooking, and Chinu learning etiquette. For the same reason (to be ladylike), they all wear maid outfits.

Despite of how violent and brutal she can be, she is still very soft-hearted when it comes to her father, and she is especially concerned with Motonari's health issues. She loves and respects her father as much as her sisters do, or even moreso. She will fiercely defend the honor of her father, once attempting to kill a man simply because he forgot to address Motonari with an honorific.

During his time in Oda on additional playthroughs, Yoshihisa develops strong feelings for Mouri Teru. The two share a large number of similarities with each other due to being the oldest and most responsible members of their respective families. Yoshihisa would often take Teru out for long romantic walks in the moonlight, where they would spend hours simply enjoying each others company. Eventually, Yoshihisa will propose to Teru, which she will either accept, becoming his wife, or decline. If Teru rejects Yoshihisa's proposal, he will become crushed, showing that he truly valued her as a person rather than as a simple fling, though he will respect her decision to do so. Notably, Teru will also fall in love with Yoshihisa if Mouri house is still active when Shimazu declares war on Oda, making her the only one of the Shimazu's potential lovers who can fall for him even without them being recruited into Oda's forces.

True to her second hobby, Teru is a very skilled fighter, possesing several Lv1 skills for battle in Sword Combat, Spear Combat and Bow Combat. She's mostly seen wielding a stick with several sharp blades that makes it resemble a Cleaning Duster, which she wields while fighting the same as when cleaning. She makes a bloody mess in the battlefield with this weapon of her.

She's a fighter that is mostly proficient at protecting allies and has a Guard Lv1 skill, but also has a very high-counter offensive. Any ally that is attacked while in her sight will be covered and "dusted away" by Teru. Rather than focusing in straight defense, she's mostly proficient at killing her allies's attackers, hence why in most games she has very high counter-attack damage. 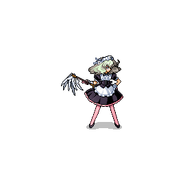