AliceSoftWiki
Register
Don't have an account?
Sign In
Advertisement
in: Articles with Minor Spoilers, Characters, Male characters,
and 7 more

Motonari is the leader of the Mouri House. He was cursed by a youkai named Daidaara which halved his lifespan but as a side-effect transformed his body into super large size. While most human beings would not be able to withstand the curse and would just die, Motonari lived with it and in fact enjoys the side effect which made him a formidable fighter on the battlefield.

Canonically, Rance lifted his curse by defeating Daidaara and made him a general in Oda's army, though he soon died due to his shortened lifespan. However, his love of battle proved so strong that his spirit continued to walk the earth upon becoming a Ghost.

Motonari is an enormous, ferocious man that had his physical attributes boosted by a Youkai Curse. He's a combat hunger fighter that sees war and fights like games, and feels great pleasure from fighting strong opponents. He loves to battle, and ever since he was cursed into his stronger form, he's eager to fight many strong opponents. It's for this reason that he challenged the Akashi House to an all-out fight with all their strongest fighters.

He's a very beloved and respected leader, being almost a father to most of his soldiers. Opposite to what he looks, he's actually a lot nicer to his subordinates than his daughters are. They all hold great respect for him and he makes sure to spend time with all of them by holding parties or other such events. He's still a pretty violent man that tends to use any opportunity he has to pick a fight when he faces a strong opponent.

All his daughters (Teru, Kiku, and Chinu) love and respect him deeply. They all take care of him and are constantly worried about his health. He seems to have a specially close relationship with his eldest daughter Mouri Teru and he's currently excitedly waiting for her child to be born.

He died at the age of 100, as the curse also halved his lifespan. However his love for battles during a chaotic era with waging wars didn't allow his soul to pass on, since he felt he still had many exciting battles yet to fight, so his ghost still remains. It is unknown when is his hunger for battles will be satiated.

Motonari is a very strong fighter with a level cap of 51, with his current level being 50 while alive. His daughters believe that he's the strongest man in the world, with or without the curse. While this is debatable he is indeed one of the strongest humans. He has a Lv1 in sword combat and his passion and love for battle shows how much of a beast he can be.

While cursed there's no doubt that he's the physically strongest fighter. Due to the curse the youkai Daidaara placed on him, his enormous strength allowed him to be a complete monster that no human could hope to defeat in a direct encounter. This was proved when he's the only one in JAPAN that, while cursed, was capable of defeating Uesugi Kenshin. Another feat of his strength is that he was the only one that gave Dark Lord Xavier a good fight. While most of the strongest fighters in JAPAN, such as the Takeda warriors, Uesugi Kenshin or Houjou Souun were easily defeated in a short time, Motonari could stand his ground and keep fighting for eight hours until he finally went down against the Dark Lord. It's fair to assume that the only reason why he lost was because of the Dark Lord's invincibility field.

Motonari's weaknesses are that he's not a particularly skilled fighter and has a very simple fighting style that relies mostly on his brute strength, thanks to his curse. Also, he isn't a particularly intelligent fighter and usually just charges head on like a bull. This makes him really dangerous as well though.

Motonari Mouri in his uncursed form. 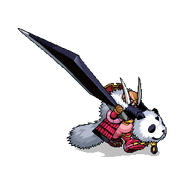