AliceSoftWiki
Register
Don't have an account?
Sign In
Advertisement
in: Articles with Major Spoilers, Characters, Female characters,
and 5 more

Minerva Margaret was the general of the 3rd Army of the Helman Empire. She was a girl born in the slums, she clawed her way to the top through raw tenacity. Born into poverty she's someone who experienced firsthand the hardship of living in the economically unstable military nation of Helman.

She made a vow at a young age to one day rule the country and will use any means to attain this goal.

Despite the poor treatment of women within the Helman Empire, she managed to join its army and claw her way up to the rank of Lieutenant of the Third Army under Thoma Lipton through raw tenacity alone.

She, along with the rest of the Third Army, assisted Patton Misnarge with his attempted invasion of Leazas, during which she occupied the city of South after defeating Yulang Mirage and her group. She later successfully held off an attack by a rebel army led by the General Barres Province and also defeated the strongest fighter in Leazas Rick Addison. It was after this that she encountered Rance on the battlefield, who she challenged to a duel to the death. Though she was finally defeated, she managed to escape with her life and returning to Helman to announce the presumed deaths of both Thoma and Patton, getting promoted to Commander of the Third Army in the process.

While she doesn't appear in the game itself, she sends a Helman platoon to attack the Kalar forest during the events of Rance Quest. While the platoon manages to collect several crystals, they are almost entirely wiped out by a curse sent by Pastel, with the sole survivor being Amitos Armitage.

She's a dangerous and fearsome woman that fights dirty and schemes in secret, the harsh life she lived in the poverty twisted her manner of thinking. She's also quite easygoing at times and isn't very respectful of rules and laws. Her attitude does not mesh well with her former subordinate Amitos's and they usually clash with each other.

Despite this, her incredible tenacity allowed her to rise from the lowest of the lowest to the General of the Third Army in a sexist country that tends to discredit the woman's place. Her body is fit and trained, scarred from the many battles she fought. She has a great ambition and dreams to one day be on the top ruling as the empress and is willing to do anything to achieve her goals, be it use her own little brother or slaughter dozens of Kalar to obtain their crystals.

She's very cruel and shows no mercy towards her opponents or subordinates, sometimes even using them as shields or throw them to die in order for her to later get an advantage. She cares little about the necessities of her allies.

She even betrayed and murdered her co-conspirators Stessel and Kechak.

Rance is disgusted by her scarred and muscular figure and refers to her as "hag". She considers Rance interesting, but views him as another obstacle in her path to the top.

Minerva is an incredibly tenacious and competent combatant. She's strong and firm, with a very aggressive and straightforward fighting style. She usually plays dirty and uses any means necessary to win and always attacks with all her might without restraining herself at all. Weak or strong, Minerva will always attack with all her strength and every attack will be aimed to kill her opponent and end the battle.

In Rance 03 she could exchange blows and, ultimately defeat Rick Addison who has the title of the strongest fighter in Leazas, which is quite a feat even if she used a low tactic to win, and some Helman soldiers were surprised by her low move since they noted that she would have won the encounter anyways.

Her current level by Rance IX is 57 and has a Hammer Combat Lv2 skill, making her a deadly and a feared opponent. She also has one of the highest caps ever seen for a human, which means she has potential to be one of the strongest humans in history and to fight on par with a low level dark lord. 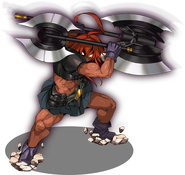