Milli Yorks was an adventurer from the Free Cities of Kathtom. She made her first appearance in Rance II, she is Mill Yorks' older sister. Milli appears as both a tough warrior and glamorous girl in daily life but she also can be quite affectionate at times, especially when it comes to her sister, Mill, even to the extent that she dares to enter a dangerous labyrinth just for her.

She has a massive appetite for sex and, needless to say, gets along with Rance well because of it (though he doesn't like the fact that she's always the one dominating him when they're at it). She's also bisexual. She lives primarily as an adventurer and warrior but somehow also runs a pharmacy with her sister.

She's an extremely beautiful and glamorous woman with an impressive perfect figure. She has a very mature and seductive appeal in her that attracts both males and females.

A talented female warrior, she has Sword Combat Lv1 skill and a cap of 28 but she's not a very good fighter. She's not bad either, and is competent enough to make a living as an adventurer, but she's very subpar when compared to real competent fighters.

She also has a Lv1 in Sexual Techniques and usually gives a good use of it. She makes an excellent partner for both men and women, and every time she appears she's seen with a different woman or man. She also seems to be quite talented to attract many into her, even if they are very shy and reserved. She obviously has a lot of sexual experienced of all sorts. She can dominate even a sex maniac like Rance in bed, though she admits he can give her a workout too. While she doesn't have a Leadership skill, she's proved to be a great commander as she was able to lead her own army in the Leazas Liberation Army, possibly due to her great charisma in general as a person. In the non-canon Kichikuou Rance she was also shown capable of leading a huge army, albeit not nearly as proficiently as a Leazas general. Her file stated: "Most of her subordinates, whether man or woman, have been raped by her. Possibly because of that, she has good leadership over them. People tend to call her unit Queen Milli and her slaves".

She has a good eye for strong fighters like Arios, who she believed to be the strongest soldier in her army.

In Rance 02 Milli goes to the labyrinth to save her sister, Mill, who is currently possessed by one of the rings' power. Unfortunately, her party was exterminated by Green Hannies and that left her as the only survivor of the group. Rance saved her just as she was about to be killed. With her purpose still yet to be fulfilled, Milli joins Rance's group mainly because she believed hers and Rance's motives are about the same.

With her phantom beasts, Mill is literally untouchable. According to a certain mummy, a special sword is needed to slice through them. The sword itself is protected by a Golden Hanny, and is very strong. After defeating the Golden Hanny, Milli obtained the special sword (which apparently may only be held by females). With the sword equipped, she can slice through Mill's phantom beasts to ensure the party's win. Mill, who cannot accept her defeat, still tries to resist Rance, who doesn't want to extend the fight any longer. Rance suddenly threatens Milli with his sword, using her as a hostage to soften Mill and force her to just give up peacefully so he can just do his "job". Eventually, his plan succeeds, and Mill is free from the ring's possession. But it turns out that Mill was just a little girl all along, and not a beautiful woman; the ring caused her body to change. Rance is floored.

Mill and Milli run a pharmacy in Kathtom, and the people seem to already forgive Mill since they have accepted her as one of them.

In the last chapter of story, Milli partakes in battle against Ragishss who just regained the ring's full powers, though beaten and is forced to retreat along with the rest of group.

In Rance III Milli fought as part of the Kathtom Defense Force against the invasion from Helman. With Rance on Kathtom's side, they fought together against enemy that had the advantage in strength, and still won in the end. After that battle, she fought again with the Helman army as the Liberation Army of Leazas.

Although she did help to defend Kathtom and free Leazas, she also made a lot of mistakes during several battles, in which Rance is very concerned with. Mill said that her sister's condition is just not at its best recently.

Sometime after Rance IV she passed away of a disease called Genfluenza. By the events in Rance Quest, Rance finds out she's already deceased. When Mill Yorks joins Rance's party, Milli's photo can be seen equipped on her which she keeps as a memorial. It mentions her age at the time of demise as 23 years.

Milli in battle in Rance 03. 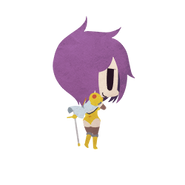