Mill Yorks was, and is, the youngest maiden of the Four Witches of Kathtom, specializing in the summoning of phantom beasts, either to attack her enemies, to protect her from harm and sometimes even for transportation.

Due to the ring's possession given to her by her teacher Ragishss, Mill became an adult who acts like a delinquent and rude toward everybody, and is especially hostile towards people that try to enter her territory. Despite the fact that the ring alters one's personality and drives them insane, Mill still held deep concern for her older sister Milli Yorks, which Rance took advantage of to make her surrender by taking her hostage. He then convinced her to lay down and have sex with him, unaware that the adult and mature-looking woman was actually a 9 years old girl. After the curse was lifted, she returned to her true body, much to Rance's trauma, who decided to erase the fact that he had sex with a kid from his memory entirely.

After the events of Rance 02, she started running a pharmacy with her sister in Kathtom.

Mill is a lively and cheerful young girl who's developing healthy over the course of the series. She's not shy at all and, after losing her virginity to Rance in her adult form, she's been curious to know more about sex. She likes Rance and thinks of him as her man ever since he took her virginity, even though Rance rejects her every time due to being too young. He doesn't like the thought of having had sex with a child at all and tries to forget it ever happened, justifying himself every time he's reminded about the event that "she looked like an adult!".

She aims to be a cool and sexy girl like her sister was, but her sexual appeal is very low for the time being. However, when grown up by the effect of the ring she was a very beautiful woman with a very voluptuous hourglass figure, so she will have a good chance when she grows up for real.

After the incident, she started a drug store in Kathtom with her older sister. Her sister Milli is often out hitting on guys and girls, so Mill is usually the one running the store.

While at the start of the games she was 9 years old by Rance IX she's already in her mid-teens.

During the events of Kichikuou Rance, Asuka becomes fascinated by the phantom beasts summoned by Mill Yorks due to finding their small and round appearances to be cute. As a result of this, Asuka begins to idolize Mill, following her around at all times in an attempt to emulate her. While Mill is greatly annoyed by Asuka's behavior initially, after Asuka learns to summon phantom beasts of her own, she becomes somewhat lonely, showing that she appreciated being admired by someone younger than her.

She has a very rare level 1 skill of Summoning, which she uses to summon Phantom Beasts from another world. They are fancy fantasy beasts that cannot be defeated by normal means. These beasts are actually surprisingly powerful and get stronger the more Mill levels up. They are really tough to take down and very strong, even individually, if Mill has enough magic power she can repeatedly summon them endlessly. This is a rare magic, and Mill is one of the few characters that has shown talent for summoning.

She has a skill level in regular magic as well, but since she focused mostly in her Summoning Magic, she hasn't delved too much into it aside from the most rudimentary spells and was never seen using conventional magic. She also possesses a cap of 34.

She also has a Sexual Technique Lv1 skill, like her sister Milli Yorks. Obviously since she's barely hit the 14 years old by Rance Quest she hasn't given much use to this skill level yet.

One of the Four Witches of Kathtom and is the second maiden for Rance to face in the actual story. She has a sister who joins Rance after her party got wiped out by Green Hannies.

She appears as the boss in fourth chapter. Her trump card, the phantom beasts were able to drive away Rance and group in their first encounter. though it doesn't work anymore after Milli acquired a special sword which can be used to slice them. Mill, who cannot accept her defeat, still trying to resist, Rance, who doesn't want to extend the fight any longer is suddenly threatening Milli with his sword, using her as a hostage to soften Mill and force her to just give up peacefully.

Rance doesn't want to waste any time to "save" the not-resisting Mill. After ring's curse is removed, Rance is very shocked because Mill turned into a kid. Milli stated that young Mill is the real one since the ring's power can turn her into an adult. Suddenly, Rance feels a deep regret for having sex with a kid.

Mill and Milli run a pharmacy in Kathtom, and the people seem to already forgive Mill since they have accepted her as one of them.

In the last chapter of story, Mill partakes in battle against Ragishss who just regained the ring's full powers, though beaten and is forced to retreat along with the rest of group.

She joins along with Milli, Shizuka, Maria, and Ran after Rance conquered Custard town. In a side-story, Mill can be aged into adult form.

Mill informs Rance of her sister's passing and joins his party in her steed. 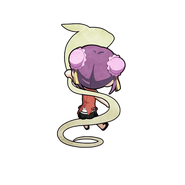 Mill in Dungeon in Rance 03.

Mill in battle in Rance 03. 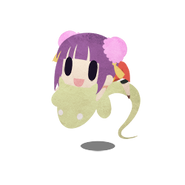 A Phantom Ghost summoned by Mill.