Mi Lordring is a fanatical priest of the AL Church that wanders around The Continent spreading the word of ALICE while battling evil with his self-titled "Holy Fist". He is easily recognized by his intense expression and affinity for dramatic poses.

Beginning his career as a simple priest, his dedication has allowed him to steadily grow in power within the Church until becoming an Archbishop and Pope candidate in his most chronologically recent appearance.

He first encountered Rance during the events of Rance 01 while he was still serving as a low-ranking priest in Leazas' capital city. Rance would frequently run into him while exploring monster-infested areas, up to and including the city's sewer system, where Lordring would fully restore his health.

He appeared again during the 7th Helman-Leazas War in Rance 03, where he served virtually the same role as he did in the previous game, healing Rance and his allies whenever they encountered him. Notably, he assisted Leazas' forces during the decisive Battle of The O, where he earned the praise of General Rick Addison for his courage. Later, Lordring somehow managed to successfully infiltrate the occupied Leazas Castle despite it being heavily guarded by both Helman soldiers and high level monsters, allowing him to continue to assist Rance's party as they stormed the castle.

His most notable appearance was in Rance Quest Magnum, where he appeared as a Pope candidate being supported by the Nation of Zeth. He was largely seen as an underdog due to his youth and lack of connections within the Church, but managed to win King Ragnarokarc Super Gandhi's favor due to his passion. He was notably the only Pope candidate besides Crook Mofus that was not in any way corrupt, and was also the only candidate who achieved his position solely through hard work rather than underhanded tactics or family connections. Because of the lack of corruption in his soul, he was the only one of Crook's rivals to survive the events of the game, and he currently continues to serve as an Archbishop for the Church under her.

Lordring is a fairly young man with a thin build. He has very distinct, almost cat-like eyes that are always in an intense, determined expression. He is never seen without his Alice puppet by his side, which he claims to be an avatar of the Goddess herself, despite (poorly) providing the voice for it himself. Interestingly, as his rank within the Church increases, his Alice puppet becomes more detailed, beginning as a crude wood block in a dress and finally becoming a replica of the Goddess ALICE during the events of Rance X. Almost inverse to his Alice puppet's growth, Lordring's hair, which was once long and flowing, has steadily fallen out as he has gained more power, to the point of him being totally bald as an Archbishop.

An incredibly passionate man brimming with religious zeal, Lordring almost always loudly announces himself whenever he appears in an area, even when there is no one else around to hear him, and almost never speaks in anything lower than a shout. Lordring believes that it is his duty as a priest of ALism to spread the gospel of the Goddess Alice all across the Continent, and takes a great amount of pride in doing so. He is largely indifferent to anything that doesn't involve his Goddess, causing him to completely forget people that he has met several times before. He is very likely slightly insane, as he frequently travels through areas devoid of human life despite his goal being to convert other people to his religion. Despite this, he is a genuinely good man who never hesitates to help people in danger. He is shown to deeply believe in the teachings of the Church, devoting himself to providing care and protection to others while expecting nothing in return for his services. Notably, he is shown to have no problem with healing Feliss, a Devil, who would normally be recognized as an enemy to ALism and persecuted by a priest, showing that his compassion to help others surpasses even his devotion to his religion.

Unlike other high-ranking members of the priesthood, Lordring is entirely oblivious to the sinister inner workings of the Church, and refrains from taking part in the corrupt actions of his peers as a result. Of the four candidates for the position of Duran Teyuran's successor as Pope, he was the only one who did not use any sort of underhanded means to achieve his position, doing so solely through hard work. Because of this, he was largely seen as foolish and naive by the other Bishops, who did not deem him as legitimate competition.

He has crossed paths with Rance several times throughout his adventures, though Rance's lack of interest in men and Lordring's lack of interest in everything that isn't related to the Goddess Alice mean that neither of them ever remembers the other. In spite of this, Lordring almost always assists Rance whenever they encounter each other by healing his and his allies' wounds.

Strangely enough, Willis Fujisaki had a crush on him when she was still training to become a Level God, going so far as to claim that he was her boyfriend. Lordring was oblivious to her feelings for him and barely even seemed to register her as anything more than a means of leveling up. After becoming a Level God, however, Willis' memories of her life as a human were largely erased and she no longer remembers Lordring.

While the full extent of his power is currently unknown, Lordring is suggested to be an extraordinarily powerful person that possesses abilities that border on superhuman. He is an extremely skilled Divine Magic user, and is capable of fully healing an entire party of high level warriors with the most basic healing spell. In addition, he is incredibly formidable physically, regularly defeating strong monsters singlehandedly while only using his fists. Compared to the other Pope candidates, who traveled with large groups of strong warriors to protect them when performing miracles, Lordring was able to travel across highly dangerous parts of the continent unaided and still successfully complete several miracles, further implying his excellence as both a priest and as a warrior. His amazing strength is additionally proven by his tendency to appear in situations and environments that are incredibly dangerous for even skilled warriors such as Rance completely unharmed, even appearing in the middle of a war zone seemingly no worse for wear fighting off several powerful Helman soldiers with ease.

In addition to his incredible physical capabilities, he also practices ventriloquism, and regularly speaks through his Alice puppet. Compared to his otherwise amazing talents, however, he is very bad at it. 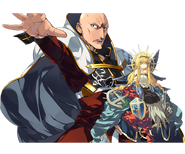 Concept artwork of Mi from the Rance Quest guide book.

Artwork of Mi from the Rance 01 manual.
Add a photo to this gallery

Retrieved from "https://alicesoft.fandom.com/wiki/Mi_Lordring?oldid=103694"
Community content is available under CC-BY-SA unless otherwise noted.