Queen Mertel Kalar is the sovereign ruler of Kalar Village, inside the border of El Quixote. In that role, she has helped her people defend the Lost Woods and protect the Fountains of Truth. She is also responsible for ongoing good relations with the humans of El Quixote, and for arranging the system of "semen collection shacks" in El Quixote, which allow for Kalars to find human men willing to breed with them. Mertel is a mother herself, with multiple daughters, although the only daughter she has identified is her former secretary, Lorenzo Kalar, possibly born out of a dalliance with the future King Ben Quixote.

During Rocinante's attempts to cause a war between El Quixote and Kalar Village, Mertel was willing to offer Aster a home in the village if he would defend it from their enemies, but he refused and defended the Kalars in a different fashion, ending the war before it could begin. Mertel later offered to aid her daughter Lorenzo in the diplomatic art of being queen, while occasionally flirting with king Ben.

Despite her duties as a monarch and a politician, Mertel makes no secret that her favourite activity is sex. After learning about Aster's legendary endurance, it took a near war with El Quixote to get her to talk to him about anything else. While not incapable of traditional diplomacy, her attention span can be thin for non-sexual matters, and she relied heavily on Lorenzo to keep her on the matter at hand. Even at her most serious, she enjoys teasing men and women alike.

In the buildup to war however, Mertel voiced the opinion that most Kalars would prefer suicide to slavery in El Quixote, and was willing to fight to the last before that happened.

As a Kalar, Mertel is not governed or protected by Mother Eve's blessing. This means she could theoretically kill someone from a species under Mother Eve's protection, or could have sex with any number of people, both without becoming an Outlaw. Unfortunately, the same is true of her in reverse.

Mertel is a sexual virtuoso, so skilled in physical matters that less experienced women have trouble understanding her attempts to share her techniques. 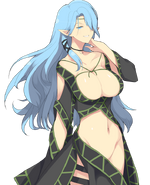 Concept art of Mertel from the Evenicle manual.
Add a photo to this gallery

Retrieved from "https://alicesoft.fandom.com/wiki/Mertel_Kalar?oldid=98419"
Community content is available under CC-BY-SA unless otherwise noted.