Merim Tser is the younger daughter of the Tser family and the long-lost little sister of Captain Ruberan. Born into a poor household in the economically unstable Helman Empire, her parents were unable to sustain the entire family and Merim was eventually sold as a slave to the Aristocratic Golch Family, being separated from her older sister as a result. As the personal slave of Bitch Golch, Merim experienced a great deal of abuse and mistreatment. She was used to serve him and his family as a maid, a sexual outlet, and experienced heavy torture due to the family's sadism (who often enjoyed whipping her).

Despite all the horrible things she went through with the Golch Family, she was given the opportunity to study and learn a lot about archaeology, history, and mechanics. This lead to her becoming a great explorer and archaeologist due to her natural talent and enthusiasm for learning. She was taken along during Rance IV for her knowledge of archaeology and ancient artifacts in order to help the Helman expedition in Ylapu that was led by Bitch Golch. After Bitch's death during the events of the game and with Rance's help, Merim became free to follow her passion and has been living a happy life as an explorer ever since.

Merim is a slim and short girl with a brown hair, rounded glasses and distinctive freckles. Due to her status a slave, her clothing is humble and cheap, but it's still specialized for adventuring and exploring uncertain locations. She's often seen carrying a heavy bag with all sorts of equipment, artifacts and encyclopedias. As is standard in the cold country of Helman, she is usually completely covered by layers of clothing but behind it, her body is covered in scars from the abuse she suffered from the Golch family.

Merim is a kind and surprisingly naive girl with a largely positive disposition. She always keep her hopes up and is optimistic most of the time despite the misfortunes she goes through, always looking the positive side of every situation and looking forward to a better future. She's in debt to Rance for freeing her from Bitch's possession, allowing her to live the life of an archaeologist that she longed for. While she's sometimes slightly scared of Rance and is aware of his brutish personality, she thinks of him as a good person and enjoys his company.

She's a naturally humble and agreeable person that usually inspires feelings of pity from others due to her harsh and miserable life, as even Rance feels bad for her. Despite this she's also described as someone that is amusing to bully and tease. She's an essentially pure girl with no ill-thoughts who remains optimistic all the time. She is, however, prone to having periods of depression when she talks about her unfortunate life, though she never attempts to portray herself as a victim. She has a deep love for exploration and archaeology and is easily excited at the idea of exploring dungeons. She's seemingly unafraid of whatever dangers might be within a dungeon and even after she's been wounded she will still attempt to return in order to continue exploring. She loves reading about ancient history, and investigating all sorts of artifacts from different civilizations. After being freed from her life as a slave, Merim has been able to work doing what she loves as an explorer, but she regularly requires the aid from adventurers when venturing in more dangerous locations. She is stubborn when she sets her mind to something, as failure doesn't depress or discourage her at all. She hopes to one day encounter her older sister Ruberan again.

Thanks to having spent most of her free time passionately studying over many things related to archaeology and research, Merim holds extensive knowledge over many things and can assist her allies by providing detailed information over enemies or different artifacts. She's knowledgeable of many ancient technology and is smart enough to figure out by herself with her own knowledge about the functioning of anything she encounters, being resourceful and ingenious enough. She's skilled at disarming traps, opening chests, or solving gimmicky puzzles designed to prevent adventurers from advancing in territories where they are not desired. Carrying an Exploration Lv1 skill and her naturally curious and eager disposition, Merim is an excellent ally for finding many hidden items or rare relics, making her a very desirable when exploring dungeons in search of something specific.

While this skills prove her to be an amazingly useful companion when adventuring, Merim holds little to no fighting ability. While she has a decent Level Cap of 23, her current Level is only 5 and she has a fragile body that has never undergone any physical training and lacks any battling skills. She's seen wielding a hammer, but she's largely ineffective and basically useless with it. Due to this, she heavily relies on being protected by her allies all the time, which is not an easy task. Merim also has a Misfortune Lv1 skill, a very unusual Skill Level that naturally makes her unlucky. No matter what she's doing or where, the mysterious forces of the universe just seem to naturally bring her mishap, and monsters like to target her as well. In Rance IV, Willis felt sorry for her and gifted her with a special item called Angel's Mirror. This item allows Merim to employ Healing Magic on herself or an ally and is a pretty powerful healing device but that can only be used a short number of times per day. At least, this allows her to be a bit more useful to her allies in the battlefield. 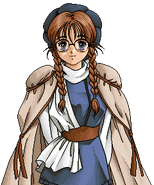