AliceSoftWiki
Register
Don't have an account?
Sign In
in: Articles with Minor Spoilers, Articles needing a Quote, Characters,
and 4 more

Menad Shisei is among the youngest of Leazas Knights, being a talented girl that worked hard to gain a respectable position. At 15 years old, she was already strong enough to be given the role of the Gatekeeper of the Leazas Castle in the Capital of Leazas and, at 17 years old, became the 2nd in command of the Leazas Red Corps, the strongest unit of the Leazas Army.

She used to have a brother and the two dreamed with achieving knighthood, regularly training together and becoming stronger. At some point, her brother died for some unknown reasons, but she managed to get the position she wanted. Despite her undeniable devotion as a knight, she has a complex about being unfeminine due to her tomboyish attitude and her somewhat boyish looks, claiming that people would never treat her like a girl. She's one of the closest friends of the personal ninja of the Queen of Leazas, Kanami Kentou. The two often spend time together when they have the chance, having lunch together or hanging out.

Her first canonical appearance was in Rance 01, where she met the adventurer Rance, who was investigating the case of the disappearance of the noble girl Hikari Mi Blanc. During the events of the game, she developed a powerful crush for Rance, with who she had her first time with. She provided her assistance in his quest for the missing Hikari by helping him enter in the Leazas Coliseum, as well as providing information.

She re-appeared during the events of Rance 03, where she managed to re-encounter with Rance, who was leading the Leazas Liberation Army as the Supreme Commander in the war against the Helman Empire. She joined the Army, as well as Rance's party, in an effort to free the country from the Helman occupation. It was during this time that Kanami found out about Menad's crush for Rance, who expressed both her disagreement and concerns over her friend's choices. Her romantic feelings for Rance were also noticed by the Queen Lia, who tried to separate them by placing her with Rick Addison in the Army in an attempt to make her fall for him instead. Menad developed an incredible admiration and a deep respect for Rick, but didn't fall in love with him, and her romantic feelings for Rance didn't change one bit.

Between the events of Rance 03 and Rance IV, during the official coronation of the Queen Lia Parapara Leazas, a group of nobles that despised Lia tried to make a Coup d'état by using a Leazas-made guardian, but Menad, Kanami and a few others work together to take down the ringleader and prevent it, allowing Lia's coronation to take place accordingly. Menad's efforts on this event were so highly praised that she became the second in command of the Leazas Red Corps as a result. She hadn't made any appearances in the official timeline after this, but she's been mentioned as taking the role of the Head of the Red Army during Rick's absences over the course of the series. She is confirmed to appear in Rance X.

Menad is a rather short girl of 156 cm tall and is 20 years old by the year LP0006. She has a short blue hair and is always wearing her armor of the Leazas Knights, to the point she has yet to be seen with normal everyday clothes. Her looks are somewhat boyish and masculine, to the point some mistake her for a boy at first, though Rance has refuted such statements by claiming that only an idiot would say such thing and that she's plenty nice-looking.

Her personality is, however, rather tomboyish and unwomanly most of the time, which certainly doesn't improve on her femininity. She's usually very serious and is a very diligent girl that takes her responsibilities very seriously, always trying her best in every situation. Her attitude has made her be treated like a boy rather than a woman for most of her life, and led her to develop a sense of insecurity with herself and complex for her lack of feminine qualities. While on duty she's extremely serious, but she is a surprisingly honest and cheerful girl in her daily life, perfectly showcased in her times with one of her best friends Kanami. Unfortunately, she's also clearly young and naive, and can sometimes be fooled or manipulated rather easily by people who want to take advantage of her position.

Menad also has a love for the sword, and admires strong and talented fighters, growing to immensely respect her General and mentor Rick Addison. It is also one of the reasons why she fell for Rance, since he's an epitome of what a powerful and brave adventurer is in Menad's mind. She shows great concern for him, as she and Mill Yorks were the only ones that expressed uneasiness in fighting him when he was brainwashed by Apostle Topaz during the events of Rance 03, whereas people like Rick or Yulang where eager to fight someone as strong as Rance, while most of the others like Kanami and Feliss where happy to get the chance to beat him up. Menad's love for Rance is devoted and selfless, to the point she claims to be aware about the Queen Lia's love for him and that he could end up becoming the King of Leazas, but that she would be happy by simply acting as a concubine for him. Kanami is very worried over her friend's decisions and states that she doesn't understand what she sees in him. Surprisingly, Rance is incredibly well-mannered and gracious when around Menad, acting like a brave and noble man. He's also charming and sweet with her during bed, which Kanami notes as completely different to the way he treats her.

She has a close relationship with her commander and mentor Rick Addison, who has a similar reputation as a brilliant young soldier. She admires him greatly due to his outstanding swordsmanship, being the reason why she started wielding a sword instead of a spear when joining his army. He trained her in the art of the sword and she's even copied his special move the By-La Way, creating her own special attack called "Kua-Lu Lane", which is similar to Rick's trademark attack, albeit less powerful.

Befitting the second in command of the Leazas Red Corps, noted for being a group conformed by the elite knights of the country, Menad is a powerful and talented fighter with great skill in swordplay. Her current level is 33 and has one of the highest Level Caps among the military, striking the very notable mark of 46, which grants her a great potential. While she has earned the respect of many for her impressive swordsmanship, she has also earned a large amount of envy from those who see her as too young for her position.

Prior to meeting Rick and joining the Red Corps, Menad wielded a spear like most of Leazas Knights but, lacking aptitude for it, Menad only came off as above average with it and incapable of realizing her real potential for swordplay. She has a Sword Combat Lv1 skill and has great talent for it, being personally trained by the finest swordsman in the country Rick Addison. She's a powerful fighter, capable of covering allies with efficiency, as well as quickly going to the offensive with great power. Her fighting prowess has been acknowledged several times, and both Lia and Leila tried to convince her to join the ranks, but she refused said offers until she was invited to the Red Army.

Upon meeting Rick, she earned a special move named Kua-Lu Lane, a wide-ranged attack similar to Rick's By-La Way that can strike down several enemies with an impressive damage and that can be used consecutively, although it is not as mighty as the original. It was meant to be just an imitation of the By-La Way, but thanks to Menad's own skill with the sword, it changed into an original Menad move.

As the second in command of the Red Corps Menad can gain command of 800 soldiers when Rick's not around, though her leadership skills have only been showcased in the non-canon Kichikuou Rance, where she proved to be a really competent commander that could lead an unit of her own with overall positive results. 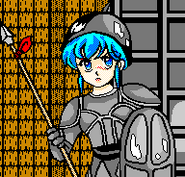 A gatekeeper in Rance I 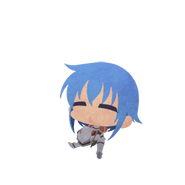 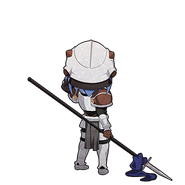 Menad in dungeons in Rance 03.

Menad in battle in Rance 03.