AliceSoftWiki
Register
Don't have an account?
Sign In
in: Articles with No Spoilers, Articles needing a Quote, Characters,
and 4 more

Melfeis Promenade is a female magician from the Kingdom of Leazas and member of the Mage Corps. Her power as a mage is pretty impressive, especially for Leazas where Magic is not nearly as developed as other kingdoms like Zeth. However, her might as a mage is not natural but came from a dangerous drug she consumed at an early age.

Years ago, when Melfeis was just a teenager, her hometown was attacked by bandits, who were stealing, killing and raping to their hearts content. In order to protect her town, she made the risky choice of ingesting a forbidden elixir that boosts the magic power of an individual, using its power to drive away the bandits. The elixir boosts the natural mana flowing in its consumer and improves her magic potential greatly. In Melfeis' case, her Magic Lv1 skill was improved into a Magic Lv2. However, it came with a dangerous drawback. Over time, the magic power within the user's body starts driving them crazy and fills them with an insane and unbearable lust that gradually intensifies over a period of two months to the point they just die in a fit of hysteria. In order to suppress and prevent this, those under this curse must fornicate with a man of a higher level than they are before the 2 months limit is reached. If she were to have sex with someone of a lower level, it would be the same as nothing and her state of arousal would only intensify.

Melfeis is a very composed and refined woman but over the two months gap she gradually loses more and more of the traits of her personality. Usually, she sleeps with the General of the White Corps, Ex Banquet before her personality starts twisting. It is implied that she holds romantic feelings for him, which he might or might not be aware of, but Ex is loyal to his deceased wife and only sleeps with Melfeis to prevent her from dying from her curse. When not under her aroused state, Melfeis is a very beloved commander that is greatly inspired by her subordinates, who treat her with great respect and admiration. 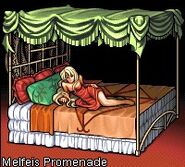