Matilda Mateury is a martial artist that longs to become of hero of justice and punish ell evildoers of the world. She aspire to become a cool, strong hero and is practicing everyday to make that dream come true.

She is first presented in Rance Quest declaring her opposition to Rance and Sachiko, claiming that she will punish them for their evil deeds. She was traveling along with Bird at the time and training to become the hero she longs to be.

During the events of Rance Quest, she consistently gets in Rance's way since she believes him to be a villain that deserves punishment, but she loses every time and is H-d by him. At one point, she even managed to steal Chaos away from him, much to his anger, but this only resulted backfiring to her after she was unable to control Chaos' and was also H-d by him.

In Magnum, she and Chaos were manipulated and brainwashed to work for the Shepherds, but she was defeated and recovered thanks to Rance, who was still mad at her and punished her thoroughly in the "Punishing Room" of the Rance Castle. She later stayed in the castle to train in its gymnasium and improve herself.

Matilda is a small and a bit tanned girl with a short purple hair tied in two long and thin ponytails. Her clothing choice is not very feminine, preferring to dress with more masculine clothes.

She's pretty a childish and innocent young girl, whose goal is to become a great hero and punish evil villains. She's impulsive, naive and very hot-blooded, getting mad with ease and quickly jumping to the action in an attempt to fight for justice. Her manner of speaking is very corny and showy all the time, making exaggerated phrases and gestures with a straight face.

She has a strong sense of moral justice, facing head on and making presumptuous declarations to the ones she thinks are minions of evil. She's reckless and doesn't think things through, leading her to mistaking situations or getting a wrong idea on people. She is clearly lacking experience and has a long way to go before turning into the Hero she desires to become.

She's fascinated by righteousness and heroes, which led her to have a crush on Bird Lithfie after believing him to be a wonderful Hero before the events of Rance Quest, which eventually led her to change her mind. Currently, she holds great respect and admiration for Urza, unilaterally declaring her to be her "Justice Mentor".

Despite having potential for battle, her recklessness leads her to end in situations that are above her league, facing opponents she stands little chance in defeating. She has a lot of energy and passion, restlessly working towards her goal every day.

While still young and with little training, Matilda shows a lot of potential to become a powerful martial artist. She carries Grappling Lv1 skill and a really high cap of 55, but her level was only 15.

She has a lot of spirit and guts, spending a lot of time training to become the hero she longs to be, but despite this she was still incapable of using Chaos like Rance can.

She mostly fights with her fists, training in boxing and pro-wrestling.

She also possesses a lv1 curry skill making her a decent cook. 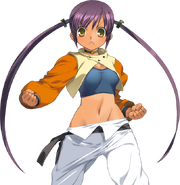 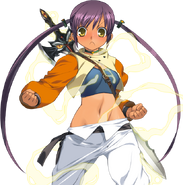 Matilda with Chaos on her possession. 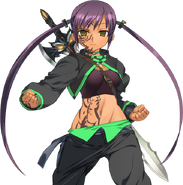 Matilda brainwashed by the Shepherds. 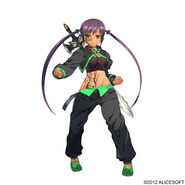