Maris Amaryllis is the Head Maid serving Queen Lia Parapara Leazas. Although she is technically a head-maiden, she has much more political power than the title suggests and has an absurd level of command over the political affairs of the country. She is the chief adviser to Lia, but she is practically the second ruler of Leazas and she administrates most of the affairs related to the economy, the military and other bureaucratic matters. Due to Lia's tendency to act thoughtlessly, Maris tends to serve as the true governing force of Leazas. While she takes care of most these things herself, the actual decisions rely on Lia and she always asks her before acting, although she does give advices or opinions fairly often, which tend to be very reasonable and sensible.

She has been serving Lia since the age of 7. Maris started to love her dearly after they slept together, as she learned of Lia's loneliness and difficulties. She regarded Lia's deviant behaviors as a consequence of having to grow up as the sole heir to the throne and go through all sorts of intrigue. She has been ruthlessly eliminating those who bring her misfortune. She exiled those who were against her, or the ones that used Lia's name for self-profit, effectively leaving close to her only the ones that really supported her. This was all done for the deep love Maris holds towards Lia, and is willing to do anything for her sake.

She made first appearance in Rance 01, where she appeared accompanying Lia at all times and was one of the few people aware of her hobby of torturing innocent, which, while she considered it evil, still supported solely because of her boundless devotion towards her, and did everything in her power to assist her and protect her from those that could find out the truth about it such as Rance.

Her appearances in the series have been rather secondary, mostly serving as Lia's servant and assisting her in the situations where she's involved with Rance. Due to the undying love Lia has for him, which lead her to act in irresponsible and irrational ways, Maris tends to act as the level-headed figure that keeps her under control. She's slept with Rance a few times, since Lia offers her to Rance whenever he wants, and Maris is willing to follow any order from Lia.

It has never been directly stated in the series but she is most likely lesbian, having had sex with Lia while seemingly having no interest at all towards men.

While in appearance she behaves like a pure lady, she's actually very intelligent and quite good at manipulating people. Most people are unaware of her true nature. Despite the fact that she might do cruel things for Lia's sake, she does tend to wave towards doing the right thing when Lia is not related and is not a bad person herself.

She loves Lia with all her heart, and will do anything for her even if she considers it evil. It doesn't matter if she has to kill people for her sake, sleep with men or even do things that are harmful for Leazas. If Maris was given the choice, Lia is more important to her than the country is. She is an extremely capable person, but she tends to spoil Lia. Rance has pointed this out to her occasionally.

She has slept with many men, but has never fell in love with one. She is aware of the feelings Rick Addison has for her, but she pretends to not notice it. She's also a very sharp person, being capable of noticing quickly others intentions or feelings with just a glare most of the time. She's also excellent at negotiating and persuading others.

Maris is also a very beautiful woman, boasting a very adult and mature figure, which she is aware of and tends to use to seduce men for Lia's benefit. She has a long straight green hair and wears a long white robe adorned with some golden plates.

Aside from her skill for administrative affairs, she is a very powerful priestess with a Divine Magic Lv2 skill as well as being an adept spear fighter. She usually wields a glowing trident in combat by coupling it with her magic, and is talented enough to give a high-level'd adventurer a hard fight.

She's very skilled at healing magic and also possesses a unique spell of her own called Divine Decomposition Wave is an extremely powerful spell that devastates multiple targets. Surprisingly, she has one of the highest levels in Leazas, being 50 her current Level, which is higher than most of the generals of the army. Her Level Cap is also among the highest in the continent, as high as 67 which is the second highest in Leazas. She's also proficient at regular magic despite lacking a Skill Level for it, being capable of casting several elemental attacks. Despite this, she doesn't usually fight unless it's a pretty desperate situation, since that's what the military is for, and mostly fights as Lia's personal bodyguard if it ever comes down to it.

She also has a secret spell of her own called "Healing 9", which removes the physical restrictions of her body caused by wounds and allows her to fight beyond the regular limits of a human body, allowing her to keep fighting even after sustaining injuries that would usually render her body incapable of moving. When she employs this ability, her body turns purple and emits a dark aura, making her look like a Demon. This ability carries severe side-effects however, as it deteriorates her body. Once the effect runs out, she collapses and is overwhelmed with insufferable pain, leaving her barely capable of moving. Because of this, it's extremely rare for her to use this skill, as she was only seen using it at the end of Rance 01.

Maris in the original Rance I. 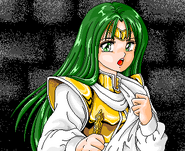 Maris in the original Rance III.

Maris being coerced into dancing in Kichikuou Rance 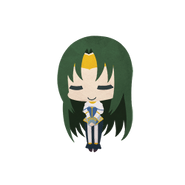 Maris in battle in Rance 03.

Concept artwork of Maris from the Rance Quest guide book.

Maris, making an embarassing dance, in the Harem Master Trading Card Game.
Add a photo to this gallery